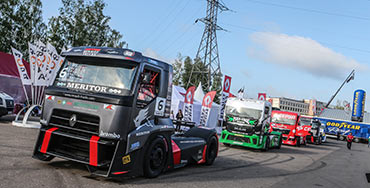 Sunday at the Smolenskring – Part 1

28. July 2013Smolenskring - The sky was slightly hazy early this morning, on the last day of the 6th round of the FIA European Truck Racing Championship in Smolensk, but it soon looked like dark glasses and sunscreen would be needed. The truck racers were ready to go at the dot of 9 am for the warm-up, but none was able to match the times they’d set the previous day — the best was a second slower. Perhaps the asphalt was still moist with dew, because it had been relatively cold in the night. Yesterday’s protagonists, the three MAN pilots Antonio Albacete (ESP), Jochen Hahn (GER), and Norbert Kiss (HUN), were again the ones to beat. This time the Hungarian was quickest, albeit very marginally.
But it was Albacete who caused a bit of excitement in the timed practice; while all the other top drivers returned to the pits after a single flying lap, once again to conserve their tyres for the SuperPole, the Spaniard continued to tear down the track. At this time he was still at the bottom of the timesheet, and had not yet been able to lay down a single really quick lap. But then he stepped up the tempo, as he’s done so often in the past, to record a chart-topping 1:51.000s, besting Hahn, David Vršecký (CZE) in a Buggyra Freightliner, and Kiss in the bargain. The other qualifiers for the SuperPole were Markus Oestreich, the two MKR Renault pilots Adam Lacko (CZE) and Markus Bösiger (SUI), Mika Mäkinen (FIN), René Reinert (GER), and Benedek Major (HUN).
At the time nobody had a clue how important his time in qualifying would be for Albacete. In the shootout of the ten fastest drivers, almost all were quickest in their first flying lap. Albacete shot to the top with a time of 1:50.517s, and he was joined there a little later by Vršecký with an identical time — down to the thousandth of a second! But pole went to the Spaniard because he’d set the time first. Oestreich and Hahn were next up on the grid, and even they were only two-tenths slower than the polesitter. Kiss, Lacko, Bösiger, Mäkinen, Reinert, and Major made up the rest of the grid. 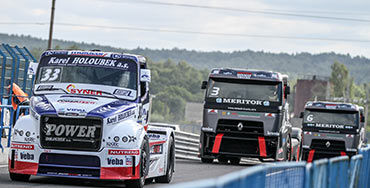 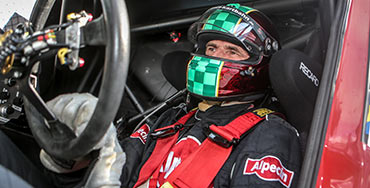 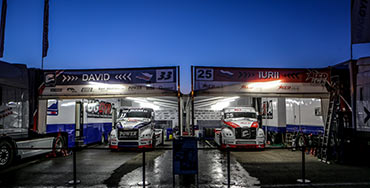