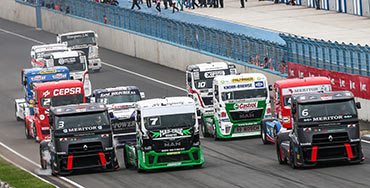 Saturday at the Smolenskring – Part 3

27. July 2013Smolenskring - Mäkinen had pole position for the second race of the day, but Bösiger was a tick faster at the start. Looming ahead was the first curve, a 180° right-hand bend that has proved to be the undoing of so many truck racers till now. Here Lacko tried, like Kiss in the earlier race, to forge ahead of the two leaders on the inside. But Mäkinen was having none of it, and while he moved in to shut out Lacko, Bösiger was able to press ahead on the outside. From there onwards it was an uncontested run to the flag for the Swiss, who finished the race with a lead of almost seven seconds. Lacko collided in the first curve with Vrsecký, which dropped both Czechs way down the field - the Buggyra pilot into ninth place, Lacko into seventh. And while Bösiger cruised to a relaxed win, Mäkinen too was able initially to put some distance between himself and the rest of the field; his pursuers, led by Oestreich, were too busy battling for third place. For lap after lap they raced bumper to bumper ― Hahn was breathing down Oese`s neck, Kiss was stuck to Hahn`s rear, and Albacete continually snapped at Kiss`s heels, till the Spaniard`s truck suddenly developed a problem with its steering and he had to let up. Only with great effort was Albacete eventually able to defend his sixth place against a resurgent Lacko.
Three laps before the finish, in the first curve again, Hahn popped ahead of Oese on the inside to take third place from the man from Fulda. But the defending champ clearly wasn`t settling for only third place; in a flash he had closed the gap to Mäkinen and, in the sweeping curve a few hundred metres before the finish, he passed his teammate on the inside to take second place by 27 hundredths of a second. Oese once again had to be content with the leavings, and he only barely had his nose ahead of Kiss at the line - by 35 hundredths! Albacete and Lacko were followed home by Reinert in eighth, a position the man from Lausitz was hard put to defend against sustained attacks from Vrsecký. The last point again went to the Hungarian youngster Major.
Truck Sport Lutz Bernau (Albacete / Oestreich) was once again the top team in the first race, followed by OXXO Energy Truck Race Team (Kiss / Major) and Castrol Team Hahn Racing (Hahn / Mäkinen). In the second race it was Hahn on top ahead of MKR Technology (Lacko / Bösiger) and Bernau. Albacete continues to lead the drivers` ranking with 230 points, ahead of Hahn (219), Oestreich (181), Kiss (175), Vrsecký (164), Lacko (126), and Bösiger (103). 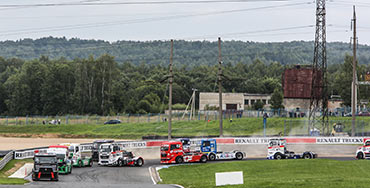 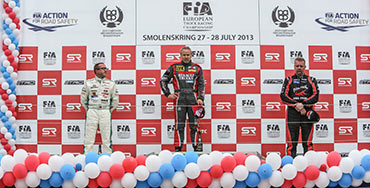