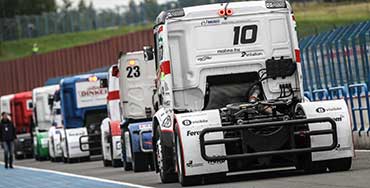 Saturday at the Smolenskring – Part 1

27. July 2013Smolenskring - The sky was overcast and we expected that it would start to rain at any moment, but it stayed dry. Even in these conditions, the time that Spaniard Antonio Albacete set in his MAN in the warm-up was amazing. With a lap of 1:50.819s he was already two-hundredths of a second quicker than Jochen Hahn’s best lap in yesterday’s second free practice — first thing in the morning!
The truck racers drove a more leisurely pace in the first qualifying session two hours later. With the exception of the Russian Iurii Egorov (Buggyra Freightliner) and the Portuguese Jose Fernandes (Renault), all did only two laps (to conserve their tyres), confident of having made it to the SuperPole. In the event it was only the two aforementioned that did not qualify for the shootout. Albacete and Hahn were joined in the top 10 by the Czech David Vršecký (Buggyra Freightliner), the two MAN pilots Norbert Kiss (HUN) and Mika Mäkinen (FIN), the two MKR Renault drivers Adam Lacko (CZE) and Markus Bösiger (SUI), the two Germans Markus Oestreich and René Reinert, and the Hungarian Benedek Major (all MAN). Major subsequently had to drop out of the SuperPole owing to problems with the steering on his truck.
In his very first lap, Albacete showed why he is the measure of the MANs – and every other truck racer this season – with a 1:50.204s, far below his weekend-topping lap of the previous year. Hahn was only two-tenths slower, followed very closely by Kiss, Vršecký, Oestreich, and Lacko — the sixth-placed Czech only three-tenths of a second behind Hahn. Bösiger, Mäkinen, and Reinert followed at some remove. 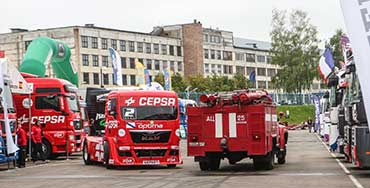 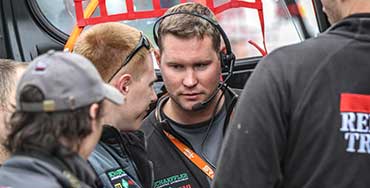