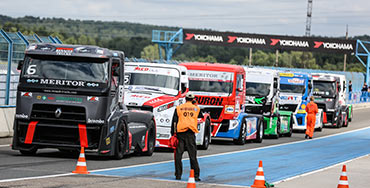 26. July 2013Smolenskring - The drivers competing in the FIA European Truck Racing Championship all arrived at the Smolenskring by early morning. This time none of them was part of the logistical convoy that brought their trucks to the circuit; they all flew into Moscow, landing at one of the three international airports in the Russian capital. The track lies around 330 km due west, which can mean a road journey of 3½ hours stretching to more than six hours, depending on the traffic.
All 12 registered drivers reported for the first free practice, the Portuguese Jose Fernandes’s Renault evidently without a functioning timing transponder. All exploited to the maximum their first opportunity to train for this sixth round of the FIA ETRC, driving progressively quicker laps till they were able to match their best times on this circuit (from previous years) towards the closing laps of the session. Championship leader Antonio Albacete (ESP) once again set the pace in his MAN, followed closely by the Czech David Vršecký (Buggyra Freightliner) and German title defender Jochen Hahn (MAN).
In the second free practice Hahn overshadowed all his competitors with a time of 1:50.839s in his very first lap that almost matched the quickest lap of the 2012 Smolensk weekend. (That lap, though, had been driven by Albacete in qualifying and with new tyres.) For a while, nobody was able to come to within a second, till Albacete really stepped on it and finally managed to get to as close as three-tenths of a second. None of the others was able to improve their lap times as the session wore on. Again, Vršecký was up in the top three, barely ahead of the Swiss Markus Bösiger (MKR Renault) and Markus Oestreich (GER) in an MAN.
Hungarian Norbert Kiss (MAN), who’s usually in the leading group even during training, appeared to be having problems and finished five seconds slower than Hahn, which meant 10th place in a field of 12.
The weather outlook isn’t particularly reassuring, but it’s a mixed forecast. Rains had been expected today, but even though the sky’s been clouded over it has remained dry. 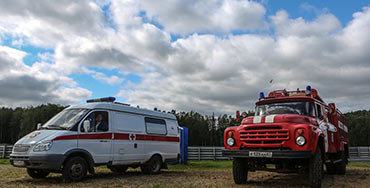 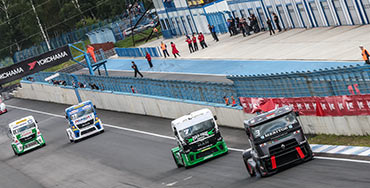