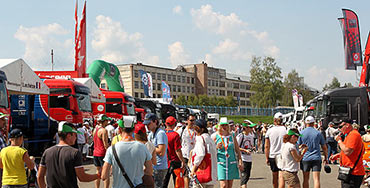 23. July 2013The journey into Russia is no longer the adventure it was when we first took it in 2010. Since then it’s become sort of routine. The Meritor motorhome, the pilot vehicle this year for the truck race circus travelling to the 4th Truck Battle Russia at the Smolenskring, the sixth round of the FIA European Truck Racing Championship, is already in Russian territory at 9 pm CET (11 pm Russian time) on Tuesday. The first trucks will follow in the early hours of Wednesday.
How many those will be in total is unclear; we still don’t have an official entry list. In the run-up to the event a few teams announced that they would draw the “joker” for Smolensk, which means they might till the last minute withdraw from this round without fear of consequences. The title aspirants and other top contenders for points will naturally be going to Smolensk to proceed on their quest —championship leaders Antonio Albacete (ESP) and Jochen Hahn (GER) foremost, followed by an entire armada of MAN colleagues, not least the two Germans Markus Oestreich and René Reinert, the Hungarians Norbert Kiss and Benedek Major, and the Finn Mika Mäkinen. They will be joined by Renault drivers Adam Lacko (CZE), Markus Bösiger (SUI), and Jose Fernandes Teodosio (POR) and the Buggyra Freightliner pilots David Vršecký (CZE) and Iurii Egorov (RUS). These are the drivers whose trucks are definitely on their way to the Smolenskring.
In addition it’s been rumoured – and also, it emerges, widely advertised in Russia – that Oleg Petrikov, racecar driver and CEO of the Smolenskring, will drive Ellen Lohr’s tankpool24 Mercedes in a one-off appearance. MB team boss Markus Bauer tells us that he made someone in Russia a tentative offer ages ago, but has not heard from them since. That’s why the team is so taken aback by the ads that have been doing the rounds in Russia featuring Ellen’s Mercedes. Whatever the case, we do have the magical number of 12 starters; any less than that and the organiser would have the right to cancel the race.
Our preliminary reports traditionally include mention of the weather forecast for the race weekend, but this is as unclear at the moment as the entry list. We’re maybe expecting showers on Friday, Saturday, and Sunday, albeit none as disastrous in consequence as the thunderstorm during the World Superbike Championship race in Moscow last Sunday.
In any case, all we have are the data for the city of Smolensk, which is actually around 100 km from the circuit it lends its name to. 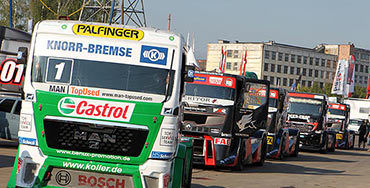 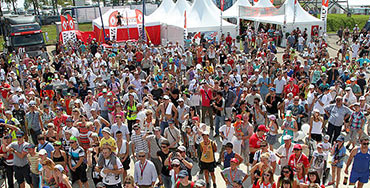 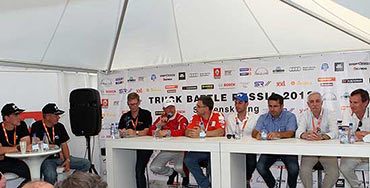