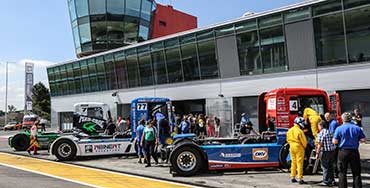 14. June 2013Nogaro - For the first time this season the truck racers were greeted by lovely summer weather. The sky over the Circuit Paul Armagnac in Nogaro, where they’ve gathered for the third round of the FIA European Truck Racing Championship, has been clear all day, with temperatures pushing 30°C. Quite a different picture from yesterday, when many teams had to set up their tents in pouring rain. The forecast, though, is blazing sunshine through the entire weekend.
For the truck racers it was down to professional life in earnest at 10:30, with the first of the taxi rides for the press. The throng of media representatives, thankfully, was matched by the assortment of race trucks, which meant that all interested journalists could be shown how these thoroughbred racing machines weighing 5½ tonnes can accelerate to their 160 km/h regulated maximum speed in five seconds flat, and then brake to a crawl in just as little time. There were often more than 10 trucks at a time lined up like buses at a terminus waiting for passengers.
These taxi drives – as well as the obligatory one-hour practice immediately after – are as instructive for the teams as proper tests, and are taken as seriously. But those waiting out in the glorious weather for their turn to ride had the feeling they were ready to go off on a summer excursion!
Any serious comparison between the individual drivers’ times could only be made during the first free practice. And it was the two champions of recent years, Antonio Albacete (ESP) and Jochen Hahn (GER), who set the pace, not only in this session but in the one that followed as well. The two MAN pilots were a class apart, at least one second faster per lap than everyone else. But you wouldn’t really know which driver’s holding how much in reserve till qualifying tomorrow a little after 11, and the Super Pole that follows. 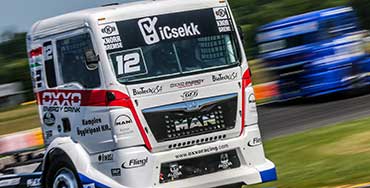 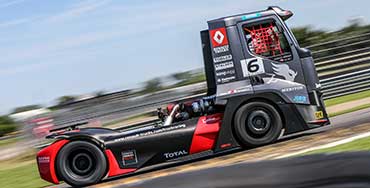