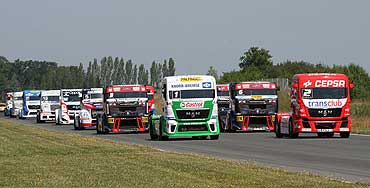 24. June 2012Nogaro - Due to the clear sky, the sun was burning and only a mild breeze made the weather bearable. The MAN service team did not let itself get distracted and on time for the start of the race the gearbox in the truck from Lacheze had been replaced. Right at the start Albacete tried to use its pole position in order to take the lead before Hahn. In the middle the two French MAN drivers Jean-Philippe Belloc and Jeremy Robineau bumped into each other. Both trucks were significantly damaged and had to quit after one more lap. Only a few meters ahead Oestreich and Vrsecky got in each other’s way and rotated around their own axis. While Oestreich had to quit afterwards, Vrsecky tried to chase the far away drivers. Because of the two accidents, the midfield had been greatly disorganized. The Dutch Erwin Kleinnagelvoort and his Scania found themselves in a potentially faster group of other race trucks. He suddenly noticed that his brakes did not work anymore. In one of the many 90°-curves his brakes failed and the Scania crashed into a wall.
Up front Albacete and Hahn were able to pull clear of the other drivers. Just like yesterday the German was glued to the rear bumper of the Spaniards truck, but Albacete was able to defend his position until they drove over the finish line. Closely behind them, Bösiger and Lacko formed another group. For a long time Bösiger was actually going to be the clear and unchallenged third one on the podium, but all of a sudden his truck slowed down and his Czech team mate passed him right away. That’s why he only placed 4th in the end.
The replacement of the transmission in Lacheze’s truck was definitely worth it. He managed to place 5th. For a long time Janiec and Kiss were fighting over the 6th place, which was exciting to watch. Once the Frenchman had passed Kiss he was able to pull away. The MAN driver René Reinert (GER) placed 8th and ensured the pole for the last race, which is going to be the first leading role in the career of the German. Mäkinen and the Spaniard Javier Mariezcurrena (MAN) received the last points. In the meantime Vrsecky came up from behind and passed everyone in front of him, but then it took him several laps to pass Ellen Lohr (GER) and her tankpool24-Mercedes. In the end the Czech had to surrender with nine thousandths of a second behind his compatriot Frankie Vojtisek (MAN). He then placed 12th and had to accept the outcome.
The pole of the truckracing rookie Reinert did not bring him a lot of luck. Only a few meters after the start of race 4 there was a multiple pile-up in which he was the biggest victim. For him the race was over before it had really started. Some drivers lost ground and others fell behind to the back of the group. The hard-hit MAN from Lacheze only managed to drive two more laps, while Bösiger rolled up the field from behind. Kiss had taken the lead but was closely followed by Janiec. Surprisingly, Albacete who had started into the race from the 8th place was racing close to the front and everyone was waiting for the Spaniard to attack the two front runners. Kiss and Janiec, however, did not only defend their position, but Albacete was also put under pressure by Hahn, who had just passed Lacko a little bit ago. In the middle of the race the German passed his Spanish rival and then Albacete as well as Lacko and Vrsecky received a “drive-through”- penalty, which put the three drivers back into the middle. At the same time Janiec was able to pass Kiss, while the fans were cheering and clapping, but then Kiss was attacked by Hahn. A little later the Hungarian got stuck in the gravel and could not manage to get out. For more than two laps Hahn had been sticking to the bumper of Janiec’s truck, but the Frenchman was able to defend his position and won with two tenth of advantage. Mariezcurrena placed 3rd. Oestreich started into the race from the last position of the grid, but had been able to fight his way to the front and in the end placed 4th. Mäkinen, Albacete, Lacko and Belloc came the following places. After Bösiger was put at the end of the field due to the turbulences in the beginning he eventually placed 9th before the Spanish MAN driver Jose Bermejo. That is how the finish took place and also the podium ceremony, but those were not the final results of the race.
Just like in Jamara the commission started to discuss the results after the race and announced the new results in the evening. Hahn and Albacete received a “drive-through “-penalty because “dangerous driving” and because of “crossing the white line at the end of the pit lane”, which were turned into 30-second penalties. Hahn therefore fell back on place 10 and Albacete placed 12th and received no points at all. That way Mariezcurrena, Oestreich and Mäkinen moved one place up and the rest moved even two places up. That way Vrsecky also received points and was placed before Hahn. Ellen Lohr did not benefit from the penalties and placed 13th. The Mercedes driver raced with a new engine control unit with an upgraded software. Throughout the weekend, the lap times of the tankpool24-Mercedes improved by 4 seconds, but are still around 4 sec. behind the best time. The MB-Motorsport-Team is convinced that they can narrow this gap in the course of the season and thus receive points. In the overall ranking Hahn (187) has only one more point than Albacete (186). Oestreich follows with 140 points, Lacko with 125 and Bösiger received 93. In both races the team ranking was won by Pneu Bösiger-Team 14 before MKR-Technology and Blaise/Bouzige Truck Racing. 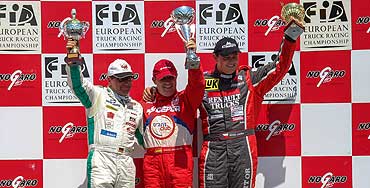 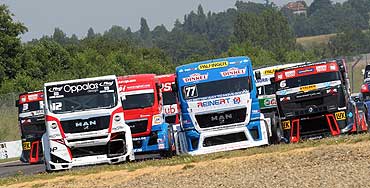 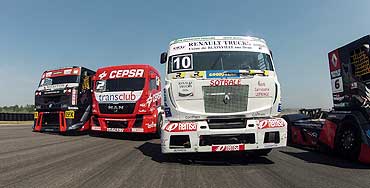 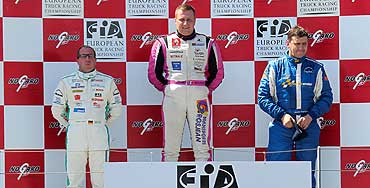