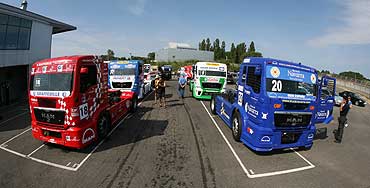 23. June 2012Nogaro - Early in the morning it was already clear that this day was going to be hot. The discussions about the additional spoilers of the race trucks from Truck-Sport-Bernau, on both of the MAN trucks from Antonio Albacete (ESP) and Dominique Lacheze, might also have been heated. In the end they were prohibited to be used anyway. While Antonio Albacete (ESP) continued to compete in the leading field (he won the timed practice with an advantage of almost three tenth over his German brand mate Jochen Hahn), Lacheze had to pull in behind the Renaults from the MKR drivers Markus Bösiger (SUI), Adam Lacko (CZE) and his compatriot David Vrsecky (Buggyra Freightliner). The other top ten places for the following Super Pole were awarded to the German Markus Oestreich (Renault) as well as the three MAN drivers Mika Mäkinen (FIN), Jean-Philippe Belloc (FRA) and Javier Mariezcurrena (ESP). During the important Super Pole, Albacete continued to take the lead and thus ensured the pole position for the first race. Behind Hahn are the three MKR drivers Bösiger, Oestreich and Lacko and Vrsecky and the phalanx of the following MAN drivers: Lacheze, Mäkinen, Belloc and Mariezcurrena. 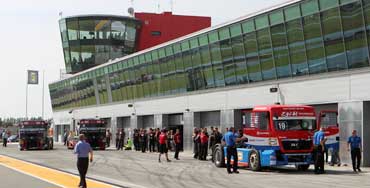 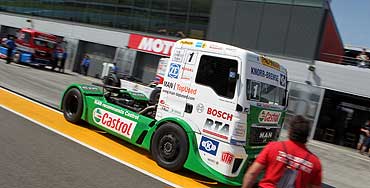