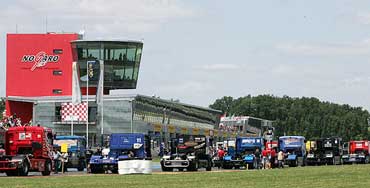 15. June 2010Although most of the teams almost pass Nogaro while they return home from Albacete and even though André Diviès, clerk of the course, always invites the teams to leave their RaceTrucks and the equipment in the paddock in Nogaro, the top teams preferred to go home to do extensive maintenance work in their repair shops or even to take the one or other improvement measure. And it was certainly not without reason that the MKR Renault Team did a lot of test drives in Albacete on Monday last week. For the Buggyra Team, Uwe Nittel will again be piloting the second Freightliner. The German gave an excellent performance during his first round in the ETRC in Albacete and collected already 3 points. And for the first time this season the Dutch Erwin Kleinnagelvoort is going to participate. But it would be a bit surprising if the Scania pilot were among the point collectors, since there are 21 trucks registered altogether.
On the other hand, the weather services predict a 70 percent probability of rain for the race weekend – although the forecast is rather imprecise and is constantly changing – so that in case of heavy rain during the races the outcome will be unpredictable.
As usual, there will be a tight schedule in Nogaro. In addition to the races of the FIA European Truck Racing Championship and the National French Truck Championship there will be two support races and a show programme. And precisely this combination is the reason why, year after year, the number of visitors flocking to the circuit outnumber the population of the small town in the Gascony 10 to 1; after all, the Circuit Paul Armagnac is one of the attractions in the native land of d’Artagnan – besides, of course, the excellent food, the Armagnac and the Floc.