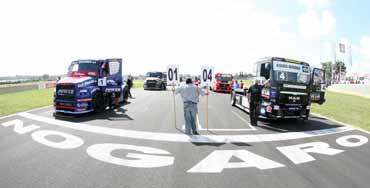 Nogaro – This and That

25. June 2009It was pretty hot in Nogaro, but the two racing days were quite bearable; by far the hottest day was Thursday, when most teams had to perform the arduous task of erecting their tents. But also on Saturday and Sunday there were temperatures of up to 47 °C (117 °F) on the spanking new surface of the track. The truck racers were delighted, and they all liked to drive on the new tarmac. Less than delighted were the stewards, when on Sunday afternoon after their race the small Legend Cars did several donuts and burnouts on the hot tarmac, because clearly visible traces of these actions remained on the surface. And Markus Bösiger wasn’t delighted either with his total of 37 points collected during the event, for him the lowest number of points achieved in this season so far. But even more the Swiss was annoyed about the – in his opinion absolutely unjustified – 1 second drive-through penalty in the Saturday race, although this cost him only 1 point.
Absolutely delighted, however, was Jochen Hahn – particularly with the Sunday race. He achieved pole position by clocking by far the best lap time, claimed victory in the first Championship race where more points can be gained, and managed a third place finish in the second race. This was a round after the fancy of the Swabian who is hoping that he now had his share of bad luck regarding the defective turbo.
His colleague in the Team HahnOxxo, Balazs Szobi, on the other hand was rather peeved. In the second race on Saturday and in the first race on Sunday he was both times pushed off the track at the same spot and by the same opponent, as the Hungarian MAN pilot told while he walked on foot from his stranded truck to the paddock.
There is a new generation in the Orsini family; the father, Dominique, acts as team manager and mechanic, while his son Florian familiarized himself with the tough business of European truck racing. The hinted take-over at the Robineau’s will perhaps take a little longer; son Jeremy is still nursing a broken finger.
While some of the „oldies“ are going to retire from active truck racing, another pilot, Dominique Lachèze, returned to participate in Nogaro as guest driver with a „rental“ RaceTruck. And immediately the Frenchman again finished in the points. Now he announced that he will also register for Barcelona, Nürburgring, Le Mans and Jarama. His daughter Flori is present at every event and sees to the correct tyre pressure, but so far there is no indication that she is planning to follow in the footsteps of her father. That means that for now there will still be only one female truck racing pilot in the European truck racing scene. And Jennifer Janiec, sister of FIA pilot Anthony Janiec, does currently participate solely in the national French Championship – with the MAN Szobi had been piloting last year.
In Nogaro now all the teams and drivers have accepted the compromise proposal concerning tyres, two-stage super charging system and differential. Priority shall be given to equal opportunity and also a reduction of expenses – or at least a freezing of the costs. Particularly the manufacturer of the racing differentials was not exactly enamoured with the idea. Allegedly by now most of the RaceTrucks are equipped with their differential, so that the criterion „reduction of expenses“ doesn’t apply anymore. But that’s the way the compromise works – that in future they will forego the two-stage super charging system but also, in return, the racing differential and special racing tyres.
On Sunday, June 28, at 9:15 a.m. there will be a half-hour report about round 4 of the European Truck Racing Championship on DSF. Particularly with regard to the two action-packed second Championship races this report is more than ever worth watching.