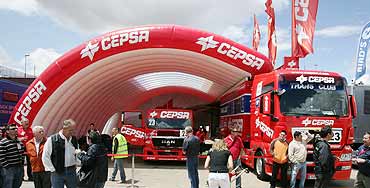 Albacete – This and That

11. June 2009The weather which was rather uncommon for Spain – especially on Saturday – was certainly one of the reasons why there wasn’t the usual number of 20,000 – 25,000 spectators at the Circuit in Albacete. The 17,000 fans who came to watch the event were, of course, particularly enthusiastic about local hero Antonio Albacete. As there were quite a lot of enquiries we would once more like to point out that the pilot comes actually from Madrid, but is also most popular in the city he shares the same name with. Of course all his opponents are aware that Albacete knows the circuit like the back of his hand, but yet the dominance of the Spaniard, especially on the first day, was a bit frustrating. Even more frustration the Hahn team had to endure; again his truck suffered a failure of the turbo charger while lying on a promising position in the first race were more points can be gained. But on Sunday the Swabians could demonstrate the performance-capability of their MAN: Pole position in the timed practice, runner-up place in the first race, victory in the second race, and fastest lap of the weekend.
As to Markus Bösiger, the drive-through penalty in Misano was still preying on his mind, as in his opinion it was completely unjustified, the more so as neither the TV recording revealed anything that would justify a penalty, nor was Jochen Hahn, the pilot who allegedly was impeded, aware of any such incident. The Swiss still is the nearest rival of Albacete in the championship standing, although not everything went according to plan this weekend. Apart from that, everybody exercised restraint there. No protests, no controversial disqualifications and penalties – except for overspeeding and black smoke. As for the latter, the stewards also acted rather discreetly, as this problem only pertained to those Spanish pilots who do not contest for points in the FIA tables – the very same pilots the audience acclaimed there.
When Antonio Conejero spotted his former Iveco – now painted in gaudy orange and with a new pilot – he obviously felt such an itch to drive that he announced that he plans to participate in the races in Barcelona and Jarama with a rented MAN RaceTruck.
In the matter of the teams’ approval to the – currently discussed – substantial technical alterations they apparently did not get any further in Albacete. It is about a complete package concerning tyres, two-stage super charging system, differential, etc., and to find a solution acceptable to everybody seems not to be that easy.
Of course, a lot of attention was focused on the new Cepsa inflatable tunnel tent, which is functioning exactly like a bouncy castle for kids. From now on the team will possibly use it for all the events. In the TV report about the truck racing round in Albacete, which the DSF is going to air on Saturday evening (June 13, 2009) at 08:30 p.m., this “tube” will certainly be presented, too.