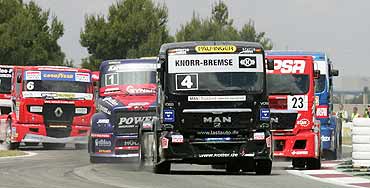 07. June 2009Albacete - Hardly ever before the weather services were that wrong with their forecast for this weekend in Albacete, because on Saturday evening shortly after 8:00 p.m. there was again an awful storm, together with gusting wind, which was almost as violent as the one the year before. Therefore many teams were less occupied with maintenance works than with securing their tents. After three hours it was over and it was calm again. Today it was again windy with a dense cloud cover, but it stayed dry, so that – after the not so well-attended event on Saturday – a total of 17,000 fans came to watch the races after all. And they could already witness during the warm-up that, apart from the G4 – David Vrsecky, Markus Bösiger (both Buggyra Freightliner), Antonio Albacete and Jochen Hahn (both MAN) – there is another MAN pilot to be reckoned with, Chris Levett. This proved true in the following timed practice, when the young Brit was on fourth behind Hahn, Albacete and Vrsecky, but ahead of Bösiger. Hahn allowed himself the luxury to drive only two laps, because he already posted a best lap time of 1:55.762 min. in his first timed lap.
And also at the start of the following Championship race the German did not allow Albacete to intimidate him. Being on pole he was on the definitely more favourable inside track and after the opening turn he was ahead of the Spaniard, who was closely followed by Vrsecky. Levett was on fourth, ahead of Allgäuer (MAN) who had managed to overtake Bösiger, who had a tough time while trying to get past the Austrian. Soon the leading trio pulled away from their chasers, but Levett, too, managed to pull clear of rest of the field. Albacete exerted tremendous pressure on Hahn with the result that the German clocked an even faster best time than in the timed practice (1:55.455 min.) in the second lap. But mid-race the red Cepsa MAN overtook the black Hahn truck; the Spaniard was simply a little bit faster. From then on Vrsecky was hard on the heels of the German, but Hahn crossed the finishing line in 2nd position, just 3 tenth of a second ahead of the Czech. Levett finished unchallenged in fourth. For ten laps now Bösiger was charging Allgäuer continuously. The dark grey Buggyra was obviously faster than the yellow MAN. But, using all his truck racing experience, Allgäuer fended off every attack from the Swiss. The front runners meanwhile had increased their lead even further – more than 20 seconds – and normally it’s no problem for Bösiger to keep pace. In the end, he finally succeeded in passing Allgäuer, but had to settle for 5th. Markus Altenstrasser (Renault) and Balazs Szobi (MAN) came home seventh and sixth, respectively, thus securing first row on the grid in the second race. The remaining points went to the two MAN pilots Stuart Oliver und Alexander Lvov.
In the final race of the weekend Szobi was on pole, ahead of Altenstrasser, Allgäuer and Bösiger, followed by Levett, Vrsecky, Hahn and Albacete. But already before the opening turn Altenstrasser and Bösiger overhauled the pole setter. Behind the Hungarian was Allgäuer in forth, ahead of Hahn – bumper to bumper with Vrsecky – Levett and Albacete. Contrary to his usual practice the local hero could not outpace any of his opponents at the start. But he was faster than Levett and soon passed the Englishman’s truck. At the top Bösiger once more came up against a very determined Austrian opponent – in the first race Allgäuer and now Altenstrasser. Soon after Hahn and Vrsecky managed to pass Szobi, they now were close behind the leading duo – and Albacete also had made up some positions and was now in 5th. Bösiger was clearly faster than Altenstrasser and attacked the red Renault for the umpteenth time. There was a slight contact, the Swiss slowed down a little, Altenstrasser got a bit off the ideal racing line, and there was enough room for Hahn which he put to good use to dash forward and to pass his opponents, with Bösiger in tow. In the very same lap both Vrsecky and Albacete also overcame Altenstrasser’s resistance. Now the leading trio was fighting among themselves, while – surprisingly – Albacete lost some ground. Hahn, Bösiger and Vrsecky were so evenly matched that there was no opportunity to overtake another – as long as nobody made a mistake. But neither of them made any mistake, and eventually Hahn, Bösiger and Vrsecky finished almost in single file within a few metres of each other. Behind Albacete there were Levett, Szobi, Allgäuer, Oliver and Lvov in the positions for the points.
The team ranking in the first race was won by Team HahnOxxo (Hahn / Szobi) ahead of Buggyra (Vrsecky / Bösiger) and Team Frankie (Altenstrasser / Vojtisek). In the second race the winner was Buggyra, followed by Team HahnOxxo and Team Frankie.
In the overall ranking Albacete extended his championship lead with a total of 152 points, followed by Bösiger (128), Vrsecky (125), Hahn (72), Allgäuer (65), Altenstrasser (64) and Levett (60).