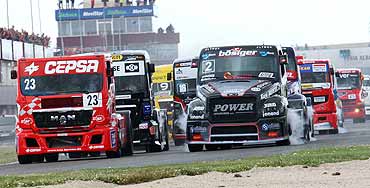 06. June 2009Albacete - Again the weather wasn’t in accordance with the weather services’ forecast. Early in the morning it started raining and went on until the first free practice. And there was a sprinkle of rain on and off and it always looked like more rain – but it stayed mostly dry. But in the two free practice sessions the track was still so slippery that most of the pilots drove rather cautiously which means that the lap times were about 10 seconds slower than in the following timed practice, where once again the G4, that is to say the four pilots who dominated in the previous and in this year’s season, set the pace. Pole position fell to Antonio Albacete (MAN), followed by Markus Bösiger (Buggyra Freightliner), Jochen Hahn (MAN) and David Vrsecky (Buggyra Freightliner).
Yesterday Hahn’s truck was fitted with a new engine and they were hoping that now the trouble with the mechanic failure was over.
While the trucks still were in the Parc Fermé, it was said that Albacete’s engine suffered temperature problems, was losing water continuously and was apparently overheated. They already had the replacement engine at hand in the Cepsa tent, but with less than 1 hour to spare there was hardly enough time to change the engine. So they choose to ignore the problem; after all, they had nothing to lose. And indeed, the Spaniard outgunned Bösiger, Vrsecky and Hahn at the start. There was no sign of any problem, quite the contrary. Instead the unlucky fellow of this season so far once more suffered the same fate as in the races before. After the engine change the day before the Hahn Team thought that – with the strong grid position he gained in the timed practice – he would finally have the chance to finish a race. But again his truck suffered a turbo charger failure. Albacete’s truck worked like clockwork, with Bösiger and Vrsecky in tow. Towards the end of the race the leading duo managed to pull clear, with Bösiger only 1 second behind the Spaniard, but there was never the impression that the Swiss could really challenge the win of the Cepsa pilot. Behind Vrsecky, Christ Levett came home 4th. For the remaining places in the points there was a fierce battle all the way to the finish line. Finally Egon Allgäuer came in 5th, followed by the two Renault pilots Markus Altenstrasser and Frankie Vojtisek in 8th, so that he would be on pole in the second race. In the last two places for the points were Alexander Lvov and Stuart Oliver (both MAN).
The turbo charger in Hahn’s MAN was soon replaced, but there were no alterations made to Albacete’s truck. At the start of the second race Vojtisek immediately lost his grid advantage to his team mate Altenstrasser, and also Vrsecky – emerging from his 6th place on the grid – overtook the fellow Czech already in the first lap. Albacete, too, made a great start in his truck which was afflicted with temperature problems. He not only passed his nearest rival in the Championship, Bösiger, but had already moved up four positions in the first lap, whereas the Swiss even lost one position. In the next lap Albacete also left Vojtisek behind. Now Vrsecky and the Spaniard together attacked the leading driver Altenstrasser. But after the fourth lap the Austrian, too, had to pay tribute to the dominance of the Buggyra pilot and the MAN driver. Meanwhile Bösiger fought an arduous battle through the mid-field and soon he, too, was behind Altenstrasser – in fourth position. For 8 laps there was a fierce battle between the two drivers from the alpine countries, and eventually, just before the end of the race, Bösiger managed to pass the Renault. Now Altenstrasser had Hahn breathing down his neck. As it is almost a tradition by now, the Swabian – after his early retirement in the first race – again had no problem catching up. Starting in position 26 on the grid he successfully fought his way through the pack and after only one lap he had already passed half the field and was in 15th position. But now he came upon the tougher pilots and he met with more resistance. But after each lap he had passed one or two opponents and in mid-race he had established himself in 7th position. Now he was behind Levett and Vojtisek, but after 3 more laps he left them behind, too, and was closing on Bösiger, who was still glued to Altenstrasser. While finally the Swiss managed to secure third place on the podium, Altenstrasser held on to his – rather unrewarding – 4th place by just half a second ahead of Hahn. Behind Vojtisek on 6th, Oliver, Levett, Allgäuer and Lvov secured the remaining places in the points.
The team ranking for both races was won by Buggyra (Vrsecky / Bösiger) ahead of Team Frankie (Altenstrasser / Vojtisek) and Team HahnOxxo (Hahn / Szobi).
In the overall ranking of the Championship Albacete is still leading with 132 points, followed by Bösiger (111), Vrsecky (105), Allgäuer (56), Altenstrasser (54) and Hahn (47).