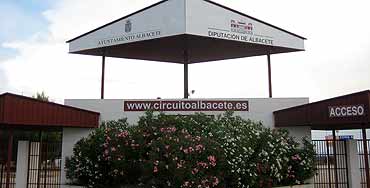 05. June 2009Even weather services are not always up to date – but in fact that’s nothing new. At least, here in Albacete nobody would be surprised if it got blazing hot or, quite the opposite, if torrential rain hit the circuit as in the year before. A harbinger of the extreme changes of the weather the truck racers witnessed on Thursday. The temperature was way beyond 30 °C (86 °F), but early in the evening, out of nowhere, the sky went pitch black. But there was no rain. However, the teams which were midway between Valencia and Albacete at that time, later told that they got into such a heavy rainstorm that it was almost impossible to continue their journey.
Today, with the sky slightly overcast, it was quite bearable, except for the strong westerly wind. Because of the sudden gusts of wind some of the tents had to be secured with additional bolts, otherwise the one or other tent could easily have hurtled through the air. Apart from that, this Friday was rather uneventful. It seemed that everybody was wishfully waiting for the Goodyear truck to arrive with the tyres. And when it finally arrived in the afternoon, there was a dash for the tyres.
The Jochen Hahn Team, together with the MAN Service Team, fitted their truck with a new engine, hoping that the Swabian’s streak of bad luck, just in the first races where the most points can be gained, will soon be over. Apart from the FIA pilots, right here in Albacete the Spanish drivers achieve the most acclaim because of their spectacular driving styles. Moreover, the points these pilots collect, will only count towards the Spanish Championship, and they do not really pose a thread to the FIA pilots. Now these teams – most of whom are not so well off in regard to their means – have got an ample supply of the 2008 Goodyear tyres which are no longer allowed in the FIA European Truck Racing Championship. In order to enable the Spaniards to start with these tyres, Lutz Bernau spoke to all the FIA Teams, and they all signed a statement that they have no objection against the Spanish drivers’ use of the 2008 tyres.
In the evening it was announced that during the weekend the approval of all pilots will be obtained regarding the intended alterations for the next season, e.g. two-stage super charging system, tyres, differential etc.