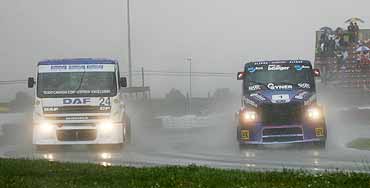 02. June 2009Traditionally the round in Albacete is held at the first June weekend. And on the La Mancha plateau, situated about 700 metres (2,300 feet) above sea level, it can already become blazing hot at this time of the year. We vividly recall the legendary 2005 water battle. But last year in the final race we had a water battle that was quite different.
Just at the start of the final Championship race the floodgates of heaven opened. Torrential rain lashed down on the circuit and soon the track was flooded so that the race had to be stopped. But at that time everybody was unaware that this was just the beginning. The access tunnel to the paddock was completely flooded, and it was only possible to leave the paddock after some emergency exits leading over the track were opened.
But, according to the forecast, this time there won’t be scorching heat nor torrential rain. The weather services predict a scattered cloud cover and temperatures not exceeding 30 °C (86 °F).
Actually the circuit at Albacete is famous for its motorcycle races, but truck racing has also a long tradition there. However, on the tight and completely flat track there are several narrow turns which are extremely difficult for the trucks to pass through. And onlookers sometimes get the impression that here – in the centre for the manufacture of knives – some pilots would also like to grab a knife.
In addition, there is often a packed field, because there are always some more Spanish pilots competing as the results of the European Championship count towards the Spanish Championship. And especially for those pilots very often it’s not necessarily a priority to collect points, but rather to entertain their fans.
The only FIA pilot who will not participate in Albacete is Jean-Pierre Blaise. Some of the teams did not go back home after the races in Misano, but set out for Spain immediately, travelling either along the Riviera and the Costa Brava or taking the ferry from Genoa. And also for Nogaro it will be worth considering whether to accomplish the long journey home. Possibly André Divies, Race Director of the Nogaro circuit, will again let the teams park their trucks in the guarded old paddock of the circuit on their northbound route.
But for now the focus is entirely on the races in Albacete. Jochen Hahn is hoping that his streak of bad luck will be over – he was already forced twice into early retirement because of mechanical failures, and each time he had looked set for a promising position. Fellow MAN driver Antonio Albacete, however, exceeded all expectations. In the past the Buggyra Freightliners always dominated the first races of the season. During the winter break Mario Kress and his team always prepare most intensively for the new season by doing intensive tests. And then it always took some time before the opponents caught up. But this time – which is quite unusual – the two Buggyra pilots Markus Bösiger and David Vrsecky are both already behind Albacete in the points standing, whereby the difference is not dramatic. And the circuit bearing the same name as the Spanish pilot is one of the Madrilenian’s favourite tracks. He did so many tests there that he could almost drive blindfolded.
Before the action starts on Saturday morning at 9:00 hrs with the first free practice, there will be a lot of time to kill on the uneventful Friday. And those teams who are condemned to idleness, sometimes come up with some absurd ideas which are definitely on a par with those of the region’s most famous son, Don Quixote.