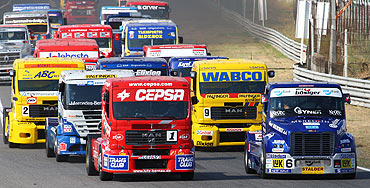 06. October 2007Jarama - Today the weather was exactly as forecast, more than 25 °C (77 °F), and on the track even about 34 °C (93 °F). And, at last, Frankie Vojtisek (Renault) was back; a bit thinner than before, but full of ambition. And that the Czech didn’t forget any of his skills during his long-time absence, he could prove already at the first free practice by gaining 5th position. And again the two Buggyra Freightliners, with Markus Bösiger and David Vrsecky, and Antonio Albacete in his Cepsa MAN were predominant. And so those three pilots marked the fastest laps in the timed practice, too. However, after only 8 minutes there was an almost one-hour break caused by Vrsecky’s truck, when in the downhill bend before the finish straight a spring at the front axle broke and sent the Freightliner spinning, and Vrsecky fully hit the crash barrier. The truck was still manoeuvrable, so that the Czech could reach the pit lane unaided, but the damaged crash barrier required substantial repairs.
Of course, Vrsecky’s truck was no longer operable, but already in the second lap the Freightliner pilot had set a time that no one could crack. So Albacete marked second fastest time, ahead of Bösiger and Gerd Körber (MAN). But “backstage” the skirmish went on.
Bösiger was said to have overhauled after the red flag was already waved. The Buggyra pilot stated that he had braked right at the time he saw the first red flag to adjust to the speed of the others. After long discussions the Swiss got a time penalty of 2 seconds, thus dropping back to 7th position on the grid.
The time schedule was now upset in such a way that evidently nobody knew at what time the Qualiy race was to start. At first it was said at 14:45, but later on was changed to 14:30. But Vsecky, whose truck could be repaired in the meantime thanks to the combined efforts of the Buggyra workforce, arrived at the grid only a few seconds late, and therefore had to start from the pit lane instead of the pole.
Of course Albacete took advantage of the favourable situation that the pole position ahead was vacant and took the lead. Jochen Hahn (Mercedes Benz), Bösiger, and Chris Levett (MAN) passed Körber right away, and after only one lap the Swiss was already closing up on the bumper of Albacete’s truck, but wisely he did not start any attacks and was satisfied with the second position behind the Spaniard. Hahn secured an unchallenged 3rd position, ahead of Levett and Körber. The most exciting fight of the race was fought between Egon Allgäuer, Jean-Philippe Belloc (both MAN) and Frankie Vojtisek for the 6th position. But the Czech had some problems with his last lapping action and the Austrian und the Frenchman managed to pass him. The top ten was completed by Stuart Oliver (MAN) and Vrsecky. The Freightliner pilot gave an unbelievable performance. Out of the pit lane, at the back of the field, he dashed forward, and after only two laps he had already overtaken 15 opponents. When crossing the finish line he had left behind 24 drivers.
At the Cup race, too, there was some confusion about the time for the start. Strictly speaking, it should have been one hour after the opening of the parc ferme at the earliest, but it could not have been much more than half an hour. Albacete was leading again right from the beginning, with Bösiger breathing down his neck. But again, the Swiss took no risks and so, cheered by an enthusiastic crowd, the Spaniard took the chequered flag in 1st. Hahn got an unchallenged third place on the podium. Already at the start Allgäuer and Körber overhauled Levett, and a bit later the man from Rheinau passed his Austrian team boss, too. Behind Levett, Vrsecky was on 7th. The top ten was completed by Belloc, Vojtisek and Oliver.
On the eve of the day of the final Bösiger now has an advantage of 20 points to Albacete. The team ranking, too, was again won by Buggyra, ahead of Team Allgäuer and Team Hahn Racing.