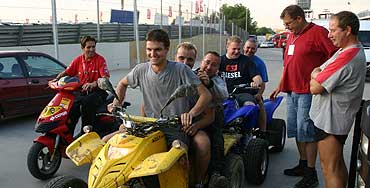 05. October 2007Jarama - Early in the morning there was a dense fog over and around the circuit. Last evening there was heavy rain in San Sebastian de los Reyes, and because of a power failure the paddock was pitch-dark, except for those teams who brought their own generators. On Friday it cleared up over the course of the day, and in the evening there was bright sunshine over the circuit. And, at long last, there was a final clarification of the chaos with the points. But it has to be said that some people had trouble understanding these decisions. The decision about Sunday’s Qualy race in Most was confirmed; Markus Bösiger, David Vrsecky and Antonio Albacete now lost their points definitely. But on top of it – in coordination with the Czech motor sports organization – the two title favourites were also deprived of the points they gained in the Cup race, which Bösiger had won ahead of Albacete. Vrsecky could not finish the race because of a mechanical defect in the final lap. According to the FIA regulations this decision is now definite.
All this has, of course, significant effects on the ranking list, as not only the three abovementioned pilots lost points, but all the others now get additional points. This means that Chris Levett subsequently gained his first cup win, because he was third on the podium behind Bösiger and Albacete.
The Swiss will now enter the final round with an advantage of 26 points, 7 points less than before the decision.
While the FIA officials were grappling with the rules and regulations, some team members and pilots explored the terrain around the circuits on their quads. And some even rode in threes on such a vehicle.