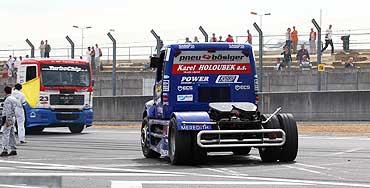 Le Mans This and That - More Reflections

17. September 2007Our report ‘Le Mans - This and That’ seems to have irritated some of the people involved in truck racing especially the paragraph about the accident at the second Cup race and the consequences arising out of the incident. We did not arrive at the scene of the accident till the third lap and came upon the following setting: The trucks of Markus Bösiger and Javier Mariezcurrena were stranded on the track and Antonio Conejero’s truck was in the security zone. Some marshals, too, were standing on the track, waving the yellow flags and warning the pilots with hand signals to drive slowly - a situation that definitely required a pace car. But in truck racing this rule is not applied, hence the race should have been stopped to tow away the trucks obstructing the circuit.
Bösiger, whose truck was so badly damaged that he couldn’t have restarted, said that at first the marshals told him to drive to the pit lane. But later they ordered him to get off the truck at once and stay behind the pit wall. Apart from Bösiger’s Freightliner there were also the other two trucks right in the danger zone. So the penalty Bösiger got later was not only incomprehensible, but rather fuels the speculations and rumours, which are uttered by several people - and not only on the quiet - that there is a plot going on against the Swiss. The situation in truck racing is problematic enough, that’s why we shouldn’t rend each other apart but leave that to the Formula 1; they are more experienced anyway.