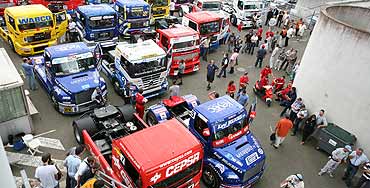 Le Mans - This and That

14. September 2007To have such favourable conditions in Le Mans was a new experience for the truck racers. But up till now the meetings at the Circuit Bugatti were always at the end of October. Quite confusing was the information about the number of spectators. For Saturday the official count was 35,000, but on Sunday it was said that the number for the entire weekend was 40,000. Only, on Sunday there were at least as many people on the grand stands as on the day before. And also the paddock and the stalls were very well-frequented. Could all these spectators add up to not more than one seventh of the number that were present on Saturday? The sidecar pilots, who filled the support programme, announced in their press release that the number of spectators was 60,000. We wrote to the organizers asking them to clarify the matter, but got no response.
Markus Bösiger, who, before he switched to truck racing, was a sidecar pilot until 1998 and was very successful in the sidecar championship, had a continuous stream of visitors - his old colleagues and friends. And on Saturday evening a sidecar was placed in the Buggyra quarters, and Bösiger and David Vrsecky posed for the photographers sitting on the motor bike. But this took place while all was still right with the world for Buggyra, because Bösiger had extended his championship lead even further and there was now a difference of 52 points to Antonio Albacete, his strongest opponent.
But then Sunday dawned. First of all, at the timed practice, Bösiger´s fastest lap time was cancelled because a marshal claimed that the Freightliner pilot had hit a corner marker. Evidently, there were no pictures available; the decision was made merely because of the marshal´s statement. So the Swiss lost his pole for the Qualy race. Bösiger declared that not he had hit the corner marker, but the truck driving ahead of him. There was no possibility to protest against this decision. However, there was a protest raised against Bösiger after the Qualy race on account of a team order. His team mate Vrsecky had launched an overhasty attack on Jochen Hahn, went off the track and, to make matters worse, crashed into a stack of tyres. All this had slowed down the Freightliner considerably, enabling Bösiger - driving closely behind - to effortlessly overtake Vrsecky, who had to speed up again. By the way - the protest was rejected.
But after the Cup race the pandemonium started. Several trucks fell victim in the crash that happened at the end of the starting strait, with Bösiger´s Buggyra right in front. Some were stranded in the gravel trap at the area of the security zone, others were blocking the track. Needless to say that the race should have been stopped without delay. The pilots, and first of all the marshals, who were partly standing on the track waving the yellow flags to warn the approaching truck racers of the wrecked vehicles, were in an utmost danger. You could say that this was a misjudgement of the situation on the part of the people responsible, but the things that happened later on were a farce. Some people even alleged a conspiracy against Bösiger. The stewards imposed a 1,000 Euro penalty on the Swiss stating that he had tried to prompt a stop of the race. But, as a matter of fact, Bösiger had only followed the marshals´ instructions, to get out of the stranded truck and seek shelter behind the pit wall. That´s exactly what any motorist is supposed to do in case of a car crash - and it must have first priority for motor sports series, too. And so on Sunday evening the main topic in the truck racing paddock, Mercedes Benz, was - at least temporarily - no longer the major point for discussion.
And finally, we have to add something to our Friday report. It wasn´t until Monday morning that we discovered that, indeed, there is a second access road to the paddock from the north. As there were still construction workers occupied there on Friday, this road was overlooked. However, this access can only be used by pedestrians or, at the most, by smaller vans, because of the restricted height of the entrance. But some more gates - for pedestrians - in the seemingly endless fences would be convenient.