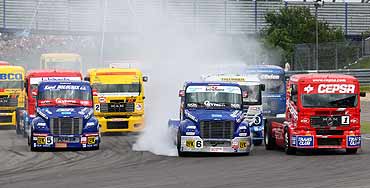 Sunday on the Nürburgring

08. July 2007Nürburgring - The spectators on the Nürburgring (a total of more than 190,000) could enjoy bright sunshine most of the time on the two chief racing days. And they won’t regret they came to the Ring, because they could watch exactly the spectacular happenings they had expected to see. The timed practice this morning ended in the same way all the timed practices do at present. Markus Bösiger on pole (1:54.938), and with a difference of only five tenths followed Antonio Albacete (MAN), David Vrsecky (Buggyra Freightliner), and Jochen Hahn (Mercedes). Hahn’s truck was due for inspections, and so, according to schedule, the engine and the gearbox were changed yesterday evening. As usual, pole setter Bösiger took the lead from the start although he was fiercely attacked by Albacete. No less combative were two pairs behind him, Vrsecky versus Hahn, and Gerd Körber versus Jean-Philippe Belloc fighting for the next positions. Bösiger managed to finish with an advantage of a bit less than 1 second. The Swiss and the Spaniard was closely followed by Vrsecky and Hahn, crossing the finishing line with a difference of only a few tenths of a second. Körber, on fifth succeeded to make up some ground on Belloc. The MAN pilots Egon Allgäuer, Chris Levett, Stuart Oliver, Jose Rodrigues, and Renault pilot Ross Garrett completed the top ten.
The Cup race started with a crash and ended with some confusion in regard to the ranking lists. A good many observers thought that Antonio Albacete’s start was a bit to fast. Already on the start straight he bumped forcefully into Bösiger’s Buggyra, and at the same time the other side of his truck was hit. Quote Bösiger: “They actually wedged me!” His Freightliner moved on for several hundred metres, but the Swiss barely managed to reach the Mercedes Arena and there had to retire. Jochen Hahn suffered the same fate. In the first bend he was pushed from behind and then was hit from both sides. The Mercedes started skidding and the passenger door burst open. Hahn managed to hang on for one more lap, but then he had to give up, too, and parked his heavily battered truck directly in front of the T4. Now Vrsecky was in the lead, followed by Albacete, Belloc, Körber and Levett. In lap four Belloc could no longer hold Körber at bay, and – cheered by the crowd – the man from Rheinau overtook the Frenchman. But the stewards were of the opinion – quite contrary to the better part of the observers – that Körber overtook his opponent while the yellow flag was waved. When, at the end of the race, he had not accomplished the imposed drive-through-penalty, he was disqualified. Later – even more confusing – they commuted the penalty and he was given a 20 second penalty, which meant that Körber now was on fifth position behind Vrsecky, Albacete, Belloc and Levett. Oliver and Rodrigues were on 6th and 7th position, respectively, ahead of the two Renault pilots, Ross Garrett and Markus Altenstrasser. And then there was another train of incomprehensible decisions.
At first there was the victory ceremony for Saturday’s team ranking they had skipped yesterday. Once again the Buggyra Team was on first position, ahead of Team Allgäuer and Team Hahn. But when the names for today’s team ranking were called, the people watching the ceremony couldn’t believe their ears. They were the same teams as yesterday, in the same order, although, strictly speaking, the Allgäuer Team did not gain any points, because Körber had been disqualified at that time, and Allgäuer was one of the victims of the mayhem at the start and was forced to retire after only one lap. Both, Team Hahn and Team Buggyra, had only one pilot each crossing the line. Team Frankie was the only team where both drivers finished the race. At that time this would have meant 27 points for the Cup race alone, and 20 points for Buggyra. So the Renault Team was rather bewildered when they were not called to the podium, and also the clamour of the journalists and bystander was in vain. Then there followed long discussion between the stewards and the teams. In addition, Buggyra had raised a protest against Albacete, which was rejected, whereas in the end Team Frankie was awarded 3rd position on the podium afterwards.
Meanwhile the final race in the Mittelrhein Cup had started. Levett was leading at first, but then had to take his truck to the pit because of some mechanical failure. Oliver benefited from the incident and finished comfortably on first position. Much to the joy of his great number of fans, the “King of the Ring”, Heinz-Werner Lenzen, scored second position, ahead of Prinz Leopold von Bayern, who drove an Allgäuer MAN truck as a guest pilot.
The title International Truck Master was won by David Vrsecky. Bösiger still holds the first position in the ranking of the FIA drivers championship with 249 points, ahead of Albacete (216), Vrsecky (197), Körber (151), and Allgäuer (101).