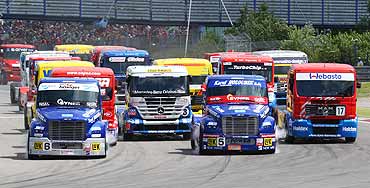 Saturday on the Nürburgring

07. July 2007Nürburgring - Contrary to the forecast, there was no clear blue sky, but at least it was dry. In the morning it was markedly cool, not even 10 °C (50 °F), but in the course of the day it was rather warm as long as you stayed in the sun. But because of the pretty hard wind it was not a &#8220;proper&#8221; summer day. And the asphalt temperatures were rather moderate, too, between 30 and 35 °C (86 to 95 °F). Contrary to that, it warmed the cockles of the Buggyra crew&#8217;s hearts, that today they took another big step forward towards winning the championship &#8211; both in the drivers&#8217; ranking and in the team ranking.
At the start for the first Qualifying race pole setter Markus Bösiger brought it home to everyone that he would not be content with anything but the first position. Sort of safeguarded by team mate David Vrsecky, who was behind him, the Swiss held onto his first position and scored a sure start-finish victory. Vrsecky and Antonio Albacete gained second and third positions, respectively. For fourth position there was a fierce battle between Gerd Körber and Jochen Hahn. At first Körber had a slight advantage, but already at the beginning of the second lap Hahn started to attack the MAN pilot. Driving past the pit wall the Mercedes pilot tried for the first time to pass Körber, and so it went on lap after lap and in almost every bend, but the MAN managed to keep Hahn behind and eventually crossed the finishing line with an advantage of only a few tenth of a second. Jean-Philippe Belloc, Egon Allgäuer, Stuart Oliver, Ross Garrett and Jose Rodrigues completed the top ten.
Frankie Vojtisek, who is still on sick leave, could be highly pleased with Ross Garrett&#8217;s performance. And also the second pilot of the Frankie Team, Markus Altenstrasser, who stepped in for Simeon Martin, was more successful than one would have expected (he gained 12th position) considering the fact that it was his first race on the Renault truck.
In the Cup race that followed, the young Austrian was brought back down to earth by the officials, who sometimes make decisions that are hardly comprehensible. In the eighth lap he was shown the black flag: disqualification. Although Altenstrasser had no clue why he had been black flagged, he obediently took to the pit lane. There he was told that he was disqualified because of black smoke &#8211; which was rather absurd. Later on, he was told that they made a mistake and had meant to wave the so-called &#8220;fried egg&#8221; flag which is black with an orange coloured dot, because one of the truck&#8217;s rear tyre was defect and had to be changed. A statement which caused some irritation everywhere.
But there was proper truck racing, too, and again there was a double win for Buggyra &#8211; with Bösiger on first and Vrsecky on second position. Albacete was again on third. Hahn had passed Körber right at the start and was now on fourth. He then started attacking Albacete, but at the same time the Swabian had to watch out for Körber, because suddenly Körber was again at the rear of Hahn&#8217;s truck. But towards the end of the race his MAN had some technical problems, and so he could not fully utilize the power of his truck&#8217;s more than 1,100 HP, which meant that Hahn could gain some ground. Then even Körber&#8217;s 5th position was in jeopardy, because Belloc had closed up, and in the end his advantage to Belloc was a mere three tenths. Allgäuer was again on seventh, ahead of Oliver and Chris Levett. The two Brits put up the most exciting fight of the race, but eventually the European Champion of the year 2004 came out as the winner. Ross Garrett completed the top ten.
It seemed to be a sure victory for Bösiger&#8217;s in the beginning, but the Swiss could account himself very lucky in the end. When he came out of the last bend, the gearing packed up, but the Buggyra pilot managed to finish the race driving with the gear he had changed to prior to the breakdown. After that, he drove the Freightliner at a crawl across the track and into the paddock. Then perhaps they made a serious mistake, because the truck was not taken to the parc fermé, but straight to the pit instead. But till the evening none of the other pilot seemed to have raised a protest against the valuation.
During the last race of the day, the two rivals Oliver and Levett kept on fighting vehemently. The points gained in the races of the Mittelrhein Cup are added to the ranking of the British Championship, with Levett being the current leader. All the more important it was for Oliver not to let Levett extend his advantage in the ranking. After a gripping fight, with Levett attacking fiercely all the time, Oliver crossed the finishing line with an advantage of not more than two tenths. On third position was Chris&#8217; father, Andy Levett.
It is a tradition that at the TGP the final competition on Saturday evening will always be the Go-and-Stop. Same as in the years before, the T3 was again jam-packed. Hans-Joachim Ebertz and Jörg Hennig surpassed each other with their commentaries. However, there was a misunderstanding with serious consequences between the driver of a car of the circuit and one of the truck racers &#8211; which caused an accident. As the programme took already longer than planned, it was decided to stop the contest and to announce the winner tomorrow, on Sunday.
Now a steadily rising number of people went to the Müllenbachschleife to attend Germany&#8217;s biggest country music event, where also last year&#8217;s high-flyer, the HossBoss Band from Berlin is back again. However, before their performance on stage, the band went to meet Jochen Hahn and his team.