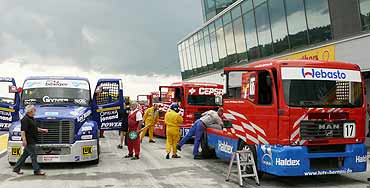 Nogaro – This and That

27. June 2007All the truck racers went to Nogaro looking forward to inspecting the new paddock, and in particular, the new pits. But it almost went awry, because only a few days prior to their arrival, a thunderstorm caused a flooding of large parts of the new paddock with a mixture of water and mud. In the south-western area of the circuit there is a ditch where usually a rivulet trickles along. But the heavy rainfall turned this rivulet into a river. This fact alone would not have been really tragic but for the dam that arose out of that. Within a short time a light brown mud stream covered the lower parts of the paddock. The small restaurant was hit hardest. And it wasn’t before Wednesday that the clearing work was completed. Only the odd-looking patterns the big brushes had left on the asphalt bespoke what had happened.
A positive fact with regards to the motor sport was that eventually a clarification was reached in the controversy of the points. For all guest drivers – regardless whether race-by-race pilots or substitutes for FIA drivers prevented from starting – there will be no more points this season. It was not that difficult for the officials to come to that decision, because, according to the rules a driver is only allowed to keep his points if he does not miss more than two races. Neither Hans-Joachim Stuck nor Ross Garrett, the only guest drivers who were in the points ranking in Nogaro, will be able to accomplish the minimum number of races required.
Of those pilots who already got points in previous races, Jose Rodrigues, Frankie Vojtisek and Michal Dolak have already reached this limit. It remains to be seen how the FIA officials will react, if one of these pilots should not be able to enter one of the races. While in the case of Frankie it was known that he would not be able to start in Nogaro due to his illness, it caused some raised eyebrows that Dolak and especially Simeon Martin were not present. Even the boss of Team Frankie, for whom Martin pilots a Renault truck, had no idea why the Spaniard didn’t show up in Nogaro.
When now the FIA people adjust the list for the team ranking, too, then everybody will be in agreement with regards to the ranking. However, especially the top pilots in the drivers’ ranking are relatively unaffected by this ambiguous situation, as Markus Oestreich – being on the verge of a win in the second Cup race in Albacete – was suddenly put out of action shortly before crossing the finish line because of a defective electric device.
While it is almost sure that Buggyra will win the team championship, the drivers’ ranking is another matter altogether. Among the title contenders Jochen Hahn is certainly the most disappointed. Last year the Mercedes pilot creamed off 60 points here – the highest possible number – and this year he could only gain 11 points. When the Swabian was one of the pilots in front, he twice was pursued by bad luck. Once a turbo burst and the next time it was a tyre.
Even though Markus Bösiger, with 37 points, has a comfortable advantage, this could very quickly change, if somebody should get the maximum of 60 points during one of the race weekends, the more so as it can happen to any pilot that he won’t be able to finish a race – as it happened to Jochen Hahn.
And so everybody is awaiting the annual highlight of the season – the Truck Grand Prix on the Nürburgring – in a fever of anticipation. During this event there will be a continuously updated special available on this web portal, and an audio live streaming – same as last year.