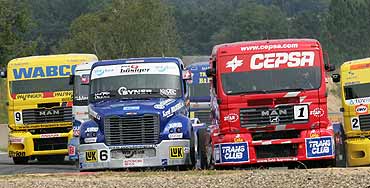 24. June 2007Nogaro - In the early morning there was fog in and around Nogaro. In the course of the day it became unpleasantly hot and humid, although the sun was veiled in haze. While the air temperature was around 25 to 29 °C (77 to 84 °F) – but it felt as if it was at least 35 °C (95 °F) – the temperature on the asphalt of the circuit rose actually to about 35 °C in the Qualifying Race and even to 50 °C (122 °F) during the Cup Race. The audience (around 30,000) was sweating profusely. In the timed practice Antonio Albacete with 1:52.831 and the two Buggyra Freightliner pilots, Markus Bösiger and David Vrsecky, – who both were only one tenth of a second slower – were a class of their own. Jochen Hahn, Gerd Körber, and Chris Levett completed the first three rows on the grid.
And in the Qualifying Race, too, the leading trio powered ahead from the start. After the first bend suddenly all hell broke loose and the chasing field was enveloped in a cloud of dust. When the dirt vanished, Jean-Philippe Belloc’s severely damaged MAN could be seen standing on the track; Enrique Sanjuan’s Mercedes had crashed into the MAN. The Spaniard, although he was 2 laps behind, managed to finish the race, while Belloc drove to the pit at a crawl.
Meanwhile the leading trio, with Jochen Hahn in tow, could put some more distance between themselves and the rest of the field. Some distance behind followed Egon Allgäuer, who – albeit his battered truck – profited by the chaos and managed to proceed from 8th position up to 5th. Behind him were – no less battered – Levett and Körber. While Albacete headed for a sure start-finish victory ahead of Bösiger, Vrsecky and Hahn, there was a tough battle for 5th position. Levett was glued to the rear of Allgäuer’s MAN, Körber was directly behind waiting for his chance. In the 4th lap the man from Rheinau overtook the Brit in the almost 180 degrees hairpin bend at the end of the long straight, and now he proceeded to attack his team leader, Allgäuer. For a long time the Austrian could fight off Körber’s permanent advances, but in the 7th lap the German won the battle and crossed the finish line on 5th position. Behind Levett, Ross Garrett was on 8th, followed by Stuart Oliver and Hans-Joachim Stuck.
Later, Oliver got a 12 second penalty because he was held responsible for the incident that sent Jo Adua’s truck spinning, which meant that the Englishman fell back on 13th, behind Adua.
In the Cup race, too, Albacete took the lead right from the start, ahead of Bösiger and Hahn, who had passed Vrsecky already before the first bend. But after only a few metres, the Buggyra hit the left rear tyres of the Mercedes – an incident that should have serious consequences. At first, Hahn could still defend his 3rd position, but then pieces of the damaged outer left rear tyre began to come apart. Vrsecky passed the Swabian, who still tried to finish the race so that there would be at least some points for the team championship. But after a little while there were only shreds left of the tyre, and Hahn was forced to take to the pit lane.
Again Allgäuer had the better start compared to his team mate, Körber, but the latter’s MAN seemed to be the faster one of the two yellow trucks. However, it took 5 laps until the man from Rheinau managed to pass the truck of the Austrian. On 6th position Levett drove all the time relatively unchallenged, with a lot of free space ahead and behind his truck, while Stuck and Belloc had a go at each other lap after lap. But it was not before the 9th lap that the Frenchman had the chance to pass the German. He crossed the finish line on 7th, ahead of Stuck, Oliver and Javier Mariezcurrena.
For the Renault Team Frankie the weekend was not so successful. As Simeon Martin did not come to Nogaro, the team was at the start with only one truck. Guest driver Ross Garrett achieved good results in the eventful Qualifying race but afterwards a defect was discovered at the suspension which could not be repaired in the short time left before the start of the Cup race.
In the champions ranking Bösiger could further widen his advantage, and has now got a total of 209 points. Albacete (172) is still on second position, ahead of Vrsecky (145), and Körber (122), who is now ahead of Hahn (119).
The team ranking was again a sure thing for Buggyra, next was Team Allgäuer, with Team Hahn and Team Frankie on 3rd and 4th position, respectively. And this is also the order in the overall standing.