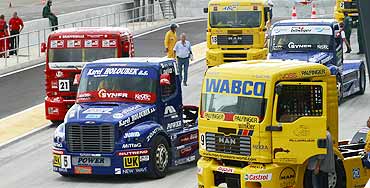 22. June 2007Nogaro - For many years now, the truck racing weekend in Nogaro is a three day event. Even when the FIA extremely sharpened the regulations for the press drivings, the organizers in Nogaro never saw any problems to carry on with them. And, according to the rules, after the press drivings there is always the opportunity for an additional 60 minute training, which the teams gladly make use of. And the pilots doing the support programme – the French Truck Championship and the SuperKart 250 – did already start today and offered a diversified programme.
In the free practice there were once again the usual “suspects” at the top, with Antonio Albacete marking absolutely fastest time – 1:53.708. But Markus Bösiger, too, stayed below 1:54. Next came David Vrsecky, Jochen Hahn, Gerd Körber and Chris Levett. But the action will not start in earnest before tomorrow, Saturday, at the first timed practice. And so this Friday was mainly spent with the press drivings and by having a lunch – traditionally organized by the boss of the circuit André Divies and his daughter Caroline – where the press people and the teams and pilots get together for casual discussions.
And, of course, the new pits and the new press centre were thoroughly inspected. Through the huge windows the journalists now have a broad view over large parts of the circuit. There are long rows of working stations, and the structure is similar to that of an auditorium. As to the internet, there is now the choice to log in via wifi or cable.
The weather was rather fine, in the morning there was a dense cloud cover, but later on – although a strong wind was getting up – it became quite sunny. And according to the forecast the weather is going to stay that way on Saturday and Sunday.