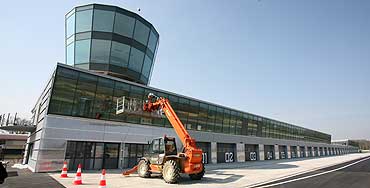 20. June 2007Never before the truck racers were so agog with curiosity when going to Nogaro, the village of 3,000 souls in the land of the Floc and the foie gras. Those of the truck racers who went there in March for the testing, could already take a look at the exterior of the new paddock with its huge pits and broad pit lane plus the state-of-the-art press centre. Now everybody is eager to see what it looks like from the inside. For years this circuit, which is rather more suitable for motor bike races, was looked upon as a sort of Mickey Mouse track by the truck racers. However, as all the pilots and teams agreed, the enthusiasms and the cordiality of the organizers and the audience always made up for any shortcomings. And now in Nogaro they are aiming to get on a par with the top-class circuits.
But there will be two more debuts at the track in the South of France – at least for this year. As Frankie Vojtisek did not get the OK from his doctor to enter the race because of his severe illness, Ross Garrett is going to fill in for him, which is no big surprise for insiders, as at the end of last year’s season many people assumed that maybe the Brit would pilot the second Renault of the Frankie Team in 2007.
And, for the first time this season, too, Hans-Joachim Stuck will enter the truck racing contest for the Allgäuer Team. After his serious accident some weeks ago it was anything but sure whether the Bavarian would be fit enough to start in Nogaro. But a few days ago he successfully mastered the 24 hours on the Nürburgring on his BMW Z4, and so the 20 to 25 minute races on a truck will certainly be no difficult task for him.
The weather forecast is rather favourable. It will not be too hot – the temperature will be a bit below 25 °C (77 °F) with only a few clouds. Rain is very unlikely, but cannot be ruled out completely.