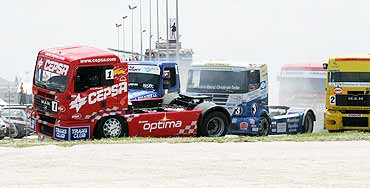 03. June 2007Albacete - While rain was forecast for half of Europe, in Albacete there was mostly sunshine with only some clouds. A crowd of more than 20,000 rather fanatic supporters expected that their local hero, Antonio Albacete (MAN) would continue his triumphal success of the previous day. But Jochen Hahn and Markus Bösiger had other ideas. In the timed practice, the Mercedes pilot, with 1:54.266, indeed outclassed his opponents; Bösiger on his Freightliner was more than 7 tenth behind, and the Spaniard had to settle for the second row on the grid alongside Gerd Körber (MAN), with Markus Oestreich (MAN) and David Vrsecky (Buggyra Freightliner) behind them. But his former superiority didn’t help Hahn at the start - a minor mistake while shifting gears, and gone was the pole. Bösiger and Albacete dashed past the Mercedes, and with ear-splitting noise the audience tried to give the Spaniard moral support when he tried to pass the Swiss, too. But although the Cepsa pilot was glued to the rear of the blue Buggyra, he never had a real chance to pass Bösiger, regardless of the encouragements by his compatriots. Hahn hoped that the two pilots ahead of him would make some mistake, but to no avail. So he had to be content with 3rd position eventually.
For twenty years now Gerd Körber has been engaged in truckracing, and almost from the beginning there was a feud with Markus Oestreich. The man from Petersberg lost the duel at the starting line against Egon Allgäuer, but in the second lap he managed to pass the yellow MAN and could then start his attack on Körber. But somehow Oese could not close on the back of the man from Rheinau and they crossed the finish line with a difference of more than one second. The fight for 6th position became a rather thrilling one. Again and again it looked as if Vrsecky was going to push Allgäuer’s MAN off the track, but the Austrian stood his ground and crossed the finish line with a paper-thin advantage of 2 tenths to the Czech. On the other rankings in the points were Stuart Oliver (MAN) ahead of Simeon Martin and Anthony Janiec (both Renault). For Chris Levett and the Atkins Team it was a very unsatisfying race weekend. On Saturday, at the heavy crash – an incident he wasn’t to be blamed for – Levett’s MAN was badly damaged, and today, at first he achieved fast times in the practice, but after only several laps in the qualification race the clutch of his truck packed up.
Today’s Cup race was certainly one of the craziest of the season. Albacete took away Bösiger’s leading position already on the start straight by having a very speedy start – as many observers stated. The Swiss was on the inner track and when entering the first bend, the Buggyra crashed with locked-up wheels into the side of the Cepsa MAN which had just cornered sharply. Albacete did a 180 degree spin, and the pack passed on the right and left, some trucks dashed across the gravel, and some stacks of tyres standing in their way, were just knocked down. But nonetheless, contrary to yesterday’s race the trucks remained operable.
Albacete fought his way back up the order and, cheered by his fans, passed truck after truck, although, of course, these were mainly the slower once anyway. Now Bösiger was leading, closely followed by Oestreich. But in the fifth lap the Swiss got a drive-through-penalty because of the incident with Albacete and fell back on 8th position. Now suddenly with Oese there was a driver in the lead where it was not yet decided whether he would get points or not. Close behind the German was Vrsecky, and a bit farther away was Hahn. While people were trying to figure out, how the FIA officials would handle the matter, if Oestreich should win the race, the German had to give up three laps before the finish because of some damage at an electric device. In the turbo charger of his MAN there was a leak where steam of about 1,000 °C (1,830 °F) escaped, causing some cables to burn. Now with Vrsecky there was again a pilot leading no one really had expected to win. With a comfortable advantage the Czech crossed the finish line ahead of Hahn and Körber.

Meanwhile Albacete had advanced further up the field and was in 4th position, most of the time closely followed by Bösiger. Three laps before the finish the Spaniard managed to pass Stuart Oliver, too. The Swiss, however, had a tough time when he tried to overtake the Briton, but in the end he had to be content with the 6th position, with a difference of 3 tenths. And so the fact that he could claim fastest lap of the race was no great comfort to Bösiger. The top septet was completed by Allgäuer, and then there was a private duel between the Renault drivers to see who would be the fastest; this was won by Janiec (8th position) ahead of Martin. And the last position in the points was gained by Eduardo Rodrigues.
The present situation in regards to the ranking remains dubious. Suddenly it was said now it’s official that Markus Oestreich would get no FIA points. But even when considering this fact, the ranking list published there was not comprehensible. If for Markus Oestreich the same rules are applied as for the race-by-race pilots, then he should get FIA points, too. Bösiger is still leading the championship ranking with 155 points, followed by Albacete (119), Vrecky (111), Hahn (108), Körber (85), and Allgäuer (58).
The team ranking was again won by Buggyra, followed by Team Allgäuer and Team Hahn. And also in the Spanish Championship Jochen Hahn again took a podium, second was Albacete and third was Martin.