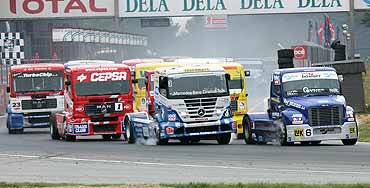 20. May 2007Zolder - In the morning the weather looked rather promising, but later on it clouded over a bit. The drivers kept looking at the sky wondering whether it would rain or not. Right at the start of the Qualifying race it began to drizzle a bit, but that was about it.
Before that, with the track still dry, an audience of more than 12,000 people watched as Markus Bösiger again won the timed practice. The Swiss marked fastest time of the day (1:58,893) on his Buggyra Freightliner, and was more than half a second faster than Jochen Hahn, who was second. On third was Antonio Albacete, and alongside the Spaniard on the grid was Bösiger’s team mate, David Vrsecky.
Thank God the rainfall was never heavy, and so it was no problem for Bösiger to stay in front at the start, despite the fact that the inner track was a bit wetter. Behind Hahn, Vrsecky took third position in front of Albacete on 3rd position. Gerd Körber (MAN) drove closely behind the Spaniard and a short time later the German managed to pass. While Bösiger could make some ground, there was a fierce fight for the second position. Vrsecky attacked Hahn incessantly. Körber hoped to profit from the duel of the two “fighting cocks”, and indeed, in the seventh lap he succeeded; the blue Buggyra dashed past the Mercedes, Hahn had a hard time fighting off Körber. Vrsecky now managed to put some distance between his truck and the chasing pack. Hahn seemed to have to struggle to keep Körber at bay. Again and again the yellow MAN drove nose to tail with the Mercedes. In the pit lane the Buggyra crew did already rejoice over another double win, but then, only some hundred metres before the finish line, the differential of Vrsecky’s truck conked out. The freightliner rolled out on the grass and fell back on 20th position. So Hahn could defend his second position with an advantage of a mere quarter of a second to Körber, who was closely followed by Albacete on fourth. For several laps Egon Allgäuer (MAN) was behind Frankie Vojtisek’s Renault, but halfway through the race, he succeeded in passing the Czech. Now, with the Renault no longer in front of him, the Austrian pulled ahead, while Vojtisek now had to fight off the British MAN duo, Chris Levett and Stuart Oliver. With a slight advantage the Czech crossed the finish line on 6th position. The two MAN pilots, Michal Dolak and Joseph Adua, gained the last two positions for the point ranking.
At the Cup race that followed Bösiger again continued with his triumphant success. Right from the start the Buggyra pilot made ground to the rest of the field; he did lap after lap like a Swiss clockwork and again had a start-finish victory. Körber at first succeeded to stay on second position, but later on had to give in to Hahn. When the man from Rheinau attacked Hahn once more to regain 2nd position, it was in vain, however. The MAN pilot fell back behind Vojtisek and Albacete on fifth. But when the Spaniard challenged Vojtisek in the chicane and forced the Czech to take to the gravel bed, Körber, too, took his chance and passed the Renault.
Now Vojtisek lost speed and in the end he not only had to let Vrsecky pass, who, after his truck’s failure in the Qualification race had to work his way up from the end of the field, but Allgäuer, too, managed to pass him. The performance of the Austrian should be appreciated all the more, as today Allgäuer had to drive with his middle finger in a splinter. In a crash with Stuart Oliver the day before Allgäuer hurt his hand; there is even the possibility that his finger could be broken. Behind the MAN pilot the two Englishmen again fought a private duel, with the former European champion coming out as winner. 10th position – the last position for gaining points, was won by the French MAN pilot, Jean-Philippe Belloc.
Sunday’s team ranking was again won by Buggyra, followed by Team Allgäuer and Team Hahn. And again in the driver’s ranking Bösiger could even further extend his leading position and has now got 115 points. Vrsecky, on second position, has 72 points, Albacete 70, Körber 66, Hahn 65, Allgäuer 45, and Vojtisek 43.