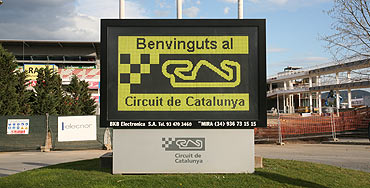 30. March 2007Barcelona - As a rule the Buggyra vanguard is the first team to arrive at the paddock at every truck racing event, and so for the people from Roudnice it was a big surprise, when upon arriving at the Circuit de Catalunya they were greeted by bright yellow colours. This time, Egon Allgäuer and his crew did not return home after the tests in Nogaro – and thus had not to put up with the chaotic snow conditions in their country – but stayed in the South of France for some days. From there they went to Barcelona without delay.
By tradition, there are again – apart from the FIA pilots – quite a few Spanish “amateur” drivers at the start, who not only add a lot of colour, but also provide a good entertainment quality. One of the most scintillating pilots is certainly Alberto Vila with his, a bit outdated, Volvo White, who for years delighted especially his fans in Jarama by making spectacular trips through the gravel. Now the Madrilenian switched to a Mercedes truck which was painted the same gaudy yellow as his Volvo and the Pegasus of his brother Enrique. Juan Romero completes the threesome. Being a journalist, he only reported about truck racing at first, but some years ago he got infected. He bought a Mercedes RaceTruck in Portugal, which was owned by Heinz-Werner Lenz a long time ago, and ever since he drives his truck at every race in Spain.
Especially in Barcelona the Friday is always the day for the technicians and mechanics. First of all, the scrutineering is due. But apart from that, there is always something to mend. Often it seems that these activities are a means of distraction from the uncertainty caused by the fact that – as always before the opening of the season – nobody knows how he will come off compared to his opponents.
The most discussed topic is, however, the email from the MMH production company in Hamburg sent to the teams some days ago, informing them that there will be no TV reports on Eurosport this year. This was already anticipated for some time, after all, it is generally known that the contracts with the lead TV sponsors will expire. But the TV producers always conveyed the impression that enough sponsors would be on hand.
Some new ideas came into the open though, and ways and means are considered how to provide the millions of truck racing fans with “moving pictures”. Nothing is definite yet, but still a bit wishy-washy. But as soon as we know more we will give more information.
The weather in Barcelona leaves a lot to be desired, too. There was even heavy rain yesterday evening. Today, towards midday, the sky became less cloudy and towards evening there was even bright sunshine. The forecast for the weekend is rather contradictory. Some see a likelihood of 60 percent and more that it will rain, others talk about not more than 15 to 30 percent.