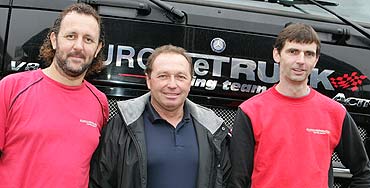 27. October 2006Le Mans - Now it turned out the paddock was not opened on Thursday afternoon, as stated before, but already in the early morning. After several parties approached FIA technical delegate Fabien Calvet in that matter, he arranged that the trucks could enter the paddock on Thursday morning, so that there was not the complete mayhem many people had feared. Still, it wasn’t really hunky-dory there. Within the circuit there is one construction site after the other, and so there is even less space than before, especially in that part of the paddock where the FIA pilots are located, so that whenever somebody wants to unload some equipment, other trailers have to be moved back and forth. Jochen Mass, the new pilot of the Euroline Mercedes team was there among his team mates Niko Pulic and Markus Oestreich, but while there wasn’t much to do for the German, another new truck racing pilot, the Frenchman Jean-Philippe Belloc, who will drive the Allgäuer MAN in lieu of his compatriot Jo Adua, did some laps on the track for the French TV.
In the evening Fabien Calvet asked all the team leaders and pilots to a meeting so that he could present the new technical regulations for the coming season. In principle, these regulations are based on the suggestions made by the same people during a previous meeting held at the beginning of this year’s season in Misano. The most significant modification concerns the choice of the engine.
Under 3.5 it says: “Trucks which had never been the subject of a technical passport before 1.1.2006 must have an engine with maximum of 13 litres.
The engine must come from the commercial range of the truck manufacturer in the year of the truck production, and not necessarily from the model of the truck, and must have been produced in a minimum quantity of 100 units.”
This means there are some really new aspects. As of now it will be possible, especially for manufacturers having a wide range of big trucks – minimum 18 tons – and engines with a 13 litre capacity, to take their choice in order to get the optimal “package”, because now it will no longer be necessary that the engine is exactly homologous to the one in the truck which the race truck is based on.