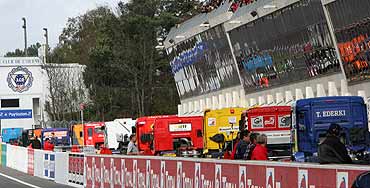 22. October 2006When last year Antonio Albacete went to Le Mans for the final, he was already the established winner of the championship. At this year’s season there are two pilots who still have the chance to spike the Spaniards guns during the last race weekend. Gerd Körber and Jochen Hahn. Körber is 32 points behind and Hahn even 56, and one should think that nothing could go awry anymore for Albacete. But at such events it’s possible for a pilot to gain a total of 60 points, and how quickly such a weekend can end in a complete cock-up, Körber’s team mate David Vrsecky experienced in Jarama. In the race before that, in Zolder, the Czech was the most eager point collector, and in Spain, too, he was again pole setter. In the end, he gained a mere 2 points.
Same with Jochen Hahn, who had some nasty experiences, too. In Zolder he wasn’t very lucky, and in Jarama it went from bad to worse. Although the Mercedes pilot was the fastest driver that weekend, he could not gain more than 16 points. If Albacete had some problem in the first Qualification race, it could mean he would have to start from the end of the grid in the Cup race. In view of the great number of drivers – 31 trucks altogether – and considering that the front-runners (about one third of the field) are on a par regarding their potential, it could become difficult for the champion to gain points. And then the competition for the championship would look quite different. And also the participation of Jochen Mass in the Mercedes Axor of the Euroline team will be in the spotlight of the media. The former F1 pilot proved already that he can very well handle even a racing vehicle of about 5 tons of dead weight even though today’s RaceTrucks can hardly be compared to a SuperRaceTruck of 12 years ago.
But before the start of the event some irritations which could not have been foreseen, have to be cleared up. It is planned not to open the paddock for the teams before Thursday afternoon at 14:00 hrs (2:00 p.m.). Already last year it would have ended in fiasco, had not some francophone team members taken matters into their hands by ignoring the orders of the paddock disposers. The paddock in Le Mans is among the ones with the most unfavourable conditions of the entire truck racing series, regarding the erection and disassembling of the equipment. Everywhere else the paddock is opened on Wednesday at the latest, at the Truck Grand Prix on the Ring they even start erecting their equipment on the Monday before the race. One week before the start of the race there is no valid time schedule available. At first it was said that they did not yet have the clearance from the FIA. Then there was a provisional plan, dated October 16, however, the time for the briefing of the FIA pilots was not listed. Then they sent an additional message stating the time for the briefing, but this was exactly the time when the second free practice was scheduled. When this was pointed out to the officials in Le Mans, they answered that now the FIA would decide this matter. But, as a matter of fact, there shouldn’t be anything to decide about, because according to the regulations the briefing is to be held one hour before the first timed practice, and that would mean: directly after the second free practice – same as at all the former 2-days-events.
For the press people there will be a real setback. Meanwhile almost all the circuits provide a wireless internet network – often absolutely free of charge, sometimes against payment of a fee. According to the person responsible in Le Mans, last year’s WiFi is no longer available. They only offer chargeable internet cable connection.
More favourable things we heard from the weather services. During the truck racings at the end of October we had to face many inclemencies of the weather in the past years, for instance: the surface of the track was iced up, or there was fog that did not disappear until noon, so that everyone was condemned to inactivity. But now the outlook is rosy. Till the middle of the week there could be heavy rain, but as of Friday the forecast is a clear sky with a temperature of about 20 °C (68 °F).
The TV report about the final in Le Mans will be broadcast by EUROSPORT on Tuesday, October 31st, at 23:00 hrs (11 p.m.) and those who will miss it, can watch a rerun the next morning, November 1st, at 8:30 hrs (8:30 a.m.).