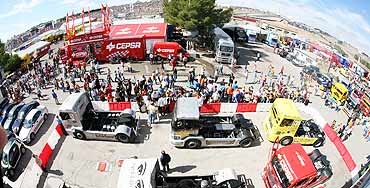 Jarama – This and That

06. October 2006About 46,000 truck racing fans seemed to be even more beside themselves than in the years before. We advise all those, who do not think that continuous honking of thousands of small compressed air cylinders on a sound level beyond the pain barrier is pure joy, to view the spectacle on the grandstands at the Farina bend only from a safe distance. And when, in addition, several groups arrange a competition to find out who has got the loudest chainsaw engine, then this exceeds by far the imagination of the average truck racing fan. It’s beyond description – you have to be there to believe it. And the fans in the Farina bend are only the tip of the iceberg, because there is the same euphoria at every spectacular spot of the Circuito del Jarama, and this circuit has a lot of them.
This atmosphere and the most challenging routing going uphill and downhill, with extremely sharp bends, are the reasons why for almost every pilot this circuit is one of their favourite tracks. Because otherwise there are some drawbacks in Jarama; the paddock is rather cramped. The teams as well as the marquees of the industry and for the catering which are situated in the back of the paddock, are far off the beaten track and thus do not attract much attention. The buildings and the tents do not really meet today’s requirements
On the other hand, with the wireless network installed in the press room last year, with a free internet access which can even be used in a small area of the paddock, they are on a level that even the two current F1 circuits for truck racing, Barcelona and the Nürburgring, are not on a par with.
However, that again the press people had to leave the room where they were working, because of the drivers’ briefing – same as at some other circuits, by the way – created some annoyance, not only in Jarama. But there is obviously no such passage in the FIA regulations which requires the exclusion of the media. In Misano, where the press centre is considerably smaller than in Jarama, there was never a journalist barred from going on with his work. And in Zolder, where there is a separate room for the briefing – as it should be practised everywhere – even a TV team was present. So the reasoning of the FIA officials, that the briefing is only meant for the pilots, was refuted, the more so, as some of the pilots were attended by their entourage, among them one or the other press person of the respective team.
In regard to the races, the discussions were mainly about Saturday’s start of the Cup race. Neither pole setter Markus Oestreich and Gerd Körber, who started from the front row as well, nor a lot of mostly neutral observers did mince their words about their opinion that Antonio Albacete jumped the gun. In addition, it was a bit peculiar that there were no usable video recordings available. In the end, the officials declared that they had not seen anything.
On the other hand, on Sunday some pilots noticed that the marshal standing at the pit wall in order to wave the green flag simultaneously to the turning of the traffic light, apparently was always some seconds ahead of the light – which could have happened on Saturday, as well. And then there would be a totally new aspect of Albacete’s “flash start”.
Certainly the fight for the championship would have been a lot more exciting, had Albacete only scored 10 to 15 points because of a drive-through penalty – or had there even been a disqualification, which would have meant 20 points less for him. But that on Sunday in the Cup race the Mercedes pilots deprived themselves of any realistic chances of the title with an incredible crash – even more as their strongest candidate started from pole and was the clear favourite – was an additional advantage for the defending champion.
But both the Cepsa team as well as the Bernau crew know how quickly fortune can change. After marking fastest time at the first timed practice, David Vrsecky – after having serious engine problems in the final lap of the Qualifying race – was glad to be able to finish in 10th. Because of the disqualification of Jochen Hahn he was promoted up to 9th position. There was
not enough time to repair the engine for the Cup race and then everything went wrong for
Buggyra. On Sunday morning there was another defect, so that it was decided to replace the entire engine so that they could take part at least at the last race. But even with the replacement – something the mechanics had done umpteen times – it did not go according to plan. So that was the end of the Cup race for them. The Czech who was in Most among the candidates for the title, had to contend with only two points in Jarama.
The Eurosport TV report will be broadcast on Tuesday, October 10, at 23:00 hrs (11:00 p.m.). The rerun will be on Friday, October 13, at 8:30 hrs (8.30 a.m.).