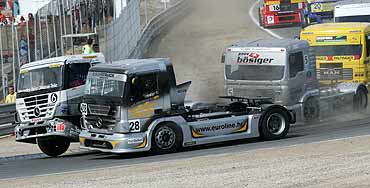 01. October 2006Jarama - In the early morning, while the stars were still sparkling, there was a bumper-to-bumper traffic jam on the motorway as the Spanish truck racing fans were underway to the Circuito del Jarama. The weather was fine with a lot of sunshine when a crowd of about 46,000 people had arrived at the circuit who wanted to cheer Antonio Albacete on his way to the championship. And indeed, although at first Markus Bösiger marked the fastest time, the Spaniard soon was in first position. However, in the very last second Jochen Hahn in his Mercedes Axor achieved a time of 2:00.068 minutes; a result nobody could better this weekend. Markus Oestreich (Mercedes Benz) was on 4th, followed by Gerd Körber (Freightliner) and Niko Pulic (Mercedes Benz).
At the Qualifying race there was nothing wrong with the rolling start this time, as it seemed. Hahn defended his pole position against the fiercely attacking Albacete, Bösiger stayed on 3rd, and Oestreich and Körber followed close behind, side by side. But when entering the second corner, the trucks of the two Germans were a bit too close to each other. While Oese managed to stay on the ideal position of the track, the Freightliner pilot who was on the outer track couldn’t help but take to the gravel bed. Jo Adua (MAN), who was on the rear of the Freightliner, followed the trail of Körber. But the man from France had problems to emerge back on the track and shot across the field to the other side, and when trying to enter the nearby right turn he crashed into the Renault of his compatriot Vincent Crozier at full speed. The rest of the field had to drive serpentine lines to avoid hitting the two wreckages and the parts lying around, cause the trucks were stranded at a rather dangerous spot next to the track. But what would Jarama be without its marshals? In a jiffy the battlefield was cleared and the race could go on. From Körber’s trip to the gravel benefited Pulic and both MAN pilots, Adam Lacko and Markus Altenstrasser, who now had left the man from Rheinau behind, which meant that Körber was now on 8th position, trying in vain to pass Altenstrasser. So now Albacete ,with 6 additional points, put an even greater distance between himself and his keenest opponent, Gerd Körber.
For the Cup race Jochen Hahn was seen as the favourite because of his easy victory at the previous race. But the man from Altensteig hadn’t such a good start. Right from the beginning Albacete took the lead and Pulic and Oestreich, too, had a slight advantage on Hahn when entering the first corner. Actually, on this spot the track is wide enough for three Axors to enter side by side, but it seemed as if Hahn’s truck on the inner track and Pulic’ truck on the centre track got entangled somehow. The left front tire of the silver white Mercedes parted company with the track, Pulic’ truck was pushed in the direction of the outer track, where it hit the central part of Oese’s Mercedes. It spun round and landed in the gravel. Hahn’s truck went straight ahead and into the gravel bed, too. Altenstrasser, Körber, Lacko and most of the rest of the pack took the chance and passed the Mercedes trucks. Albacete and Bösiger gradually pulled away, although the man from Switzerland could not jeopardise Albacete’s much celebrated victory. When fighting for the 3rd position, Körber again found Altenstrasser a hard nut to crack. Again the truck race rookie fought off all the attacks of the old hand and finished 3rd, beaming with joy. In the middle of the race a shower of stones hit Lacko’s MAN, smashing its windscreen to pieces. Handicapped in such a way, the young Czech barely succeeded to gain 4th position with an advantage of 5/10 seconds to Hahn who fiercely contested him at the end. While Pulic had to park his severely damaged Axor after for more laps, Oestreich started an impressive wild chase. He succeeded in overtaking about 10 opponents and eventually finished 7th behind Hahn.
With Chris Levett from the Atkins Racing Team, who was 10th in the Qualifying race and now finished in 9th position, for the first time a race-by-race pilot scored points in the European Championship.
Albacete is now leading the overall standing with 301 points. At the final round in Le Mans, there are only Körber (269) and Hahn (245) left who could compete with the Spaniard for the title – in terms of figures.