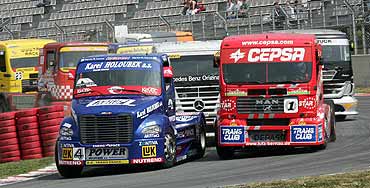 08. April 2006Barcelona - For a long time the truck racers had not been that nervous when starting a new season, because nobody could really size up his own strength. Nearly everybody believed he was better than last year, but in truckracing a split second will be important. During the first practice session the Buggyra Freightliners definitely took the lead. A very good performance gave the 3 Mercedes Axor trucks with Jochen Hahn, Markus Oestreich and Niko Pulic. The brand new truck of the Croatian was not completed before late last night. But the Markus Bösiger team was not really satisfied – they had hoped to accomplish more. It took not very long to find the ''evil-doer'': the differential. But it would have taken too much time to change it, so the Swiss MAN TGA had to pull through the race.
But at the timed practice a man nobody had really reckoned with, put the fear of God into the ''establishment'' - Jose Rodrigues with his old MAN 19.414. Almost up to the end the Portuguese could keep 2nd position behind the unchallenged leading Vrsecky, but then local hero Antonio Albacete with his red Cepsa MAN beat him by two-tenth of a second. On 4th was Jochen Hahn in front of Markus Oestreich. Behind him Niko Pulic would have completed the Mercedes trio, had he not been banished to the end of thegrid. A bit disappointing was the 6th position for Gerd Körber, who from time to time drove at snail's pace and lost more than 1 second compared to the free practice sessions. So you could call it a historic grid with Oestreich and Körber side by side, and directly behind came Markus Bösinger, just like in the past SuperRaceTruck times. Hard on the heels of the establishment was rookie Markus Altenstrasser with his Allgäuer MAN.
However, practice is one thing, but races are something else. In the following qualifying race Vrsecky made his pace from the pole position and after some minor skirmishes with Albacete the Start-Finish victory was a piece of cake. Then Jochen Hahn attacked the red MAN, and much to the chagrin of the Spanish audience the Swabian managed to spin past the local matador and took 2nd. After a tough fight between Oestreich and Körber, where the latter got the short straw, Oestreich passed Rodrigues and reached 4th position. Next came Körber, Bösiger and Altenstrasser. Ross Garrett (Foden), the only Brit left on the circuit, could just defend his position against Vincent Crozier (Renault) and Pulic who came charging from the end of the field.
But the disagreeable part for Markus Oestreich was yet to come. At the weighting the
Technical delegate meant to notice that the Euroline Mercedes had no doubt the exact total weight, however, was underweight (5 kilo) at the front axle. The team protested vehemently. They said that their own scale, which was exactly balanced, had shown the correct weight, and that the official FIA scale was not horizontal, but was slightly ascending, so that the weight automatically shifts on the back axle. But all the lamentation was futile, Oese was disqualified and ordered to start from the end of the grid. But because of all the fuss he arrived late and had to start from the pitlane.
At the CupRace Vrsecky sped off with his truck and his win was much less at risk than the gap would tell. Hahn, however, dropped back 5 or 6 positions from the beginning, but after a tough fight he could gain up and reached 4th position. The 2nd position was held for a long time by Antonio Albacete, but in the end he was defeated by a fiercely attacking Gerd Körber. Markus Oestreich worked his way forward from the end until he came up against Ross Garrett, who fought tooth and nail to defend his position and reached 6th behind Bösiger. But both the man from Switzerland and Oese became victims of the speed control. The man from Fulda got a 20 seconds penalty for overspeeding which threw him back to 8th position. And even worse it hit Bösiger whose instruments broke down completely several times during the race. The MAN pilot got a penalty of 50 seconds and so could not get any points cause he reached only 15th position.
With his dream start David Vrsecke leads the overall stadnings with 30 points; next positions are held by Gerd Körber (21), Antonio Albacete (20) and Jochen Hahn (19).
In the evening Lutz Bernau was elected team delegate and Markus Oestreich was elected representative of the drivers of the FIA Truckracing Committee.