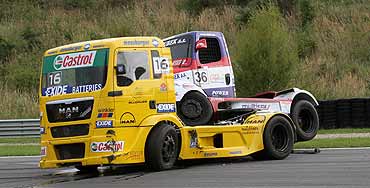 Most – This and That

01. September 2010This was the coldest racing weekend the truck racers ever experienced in Most. In late August the temperatures in the Czech Republic are usually around 25 degrees or even more. But this weekend daytime highs were in the mid-10s and warm jackets were called for. And to crown it all – there were rain showers time and again. However, the weather did not stop the crowd of 48,000 from enjoying an exciting race weekend. On Monday morning the thermometer showed fridge temperatures, but Mario Kress had long ago scheduled some test laps for his two pilots Markus Bösiger and Markus Oestreich. For the MKR team the weekend in Most turned out to be the most successful round so far. The two Renault drivers not only managed to secure front row twice in the SuperPole, but used their starting slot positions to good effect and scored two impressive double victories. And what’s more, with a total of 91 points the two pilots were the top points collectors. But Kress chose not to rest on the teams newly gained laurels and made Bösiger and Oestreich drive lap after lap, even though the conditions were far from ideal.
In the FIA European Truck Racing Championship there is never any standstill, that’s not only the opinion of Kress. And particularly when there are completely new constructions – as with the two MKR Renault trucks – it makes even more sense to take advantage of every opportunity to do extensive tests; for instance in regard to the rather different responding behaviour of the tyres.
The Spaniard Antonio Albacete, who is currently at the top of the points standing, at present holds a 36 points lead over his German MAN colleague Jochen Hahn and sits 42 points clear of Bösiger. But there are still 180 points up for grabs, so that the outcome of the championship is still open.
For local hero David Vrsecky it had been an ill-starred weekend. Finally he even lost his 4th position in the championship standing to Oestreich. The Buggyra Team had been full of hope that the reigning European Champion would be able to make up ground on his “home” track where he usually can drive blindfold. But instead he had to yield to his nearest opponents in the timed practice, and later in the race when he wanted to put his “special knowledge” of the circuit to good use, he had been dogged by bad luck.
And just when his German team mate Uwe Nittel proceeded to do some damage limitation for the team, a spectacular collision with his Russian colleague Alex Lvov (MAN) put both trucks out of action. Although the two vehicles remained stranded in the narrow bend at right angles to the track and there was barely enough space for the other RaceTrucks to speed past, the race went on, just like on Saturday, when MAN pilot Zoltan Birnbauer (HUN) had come to a halt at the end of the double chicane in the safety zone.
In the past quite a few races have been stopped in less perilous situations.
The press centre in Most – a fully-glazed big room with tarred flat roof – which always mutated into a sauna when the sun shone, had been completely refurbished. However, the new air conditioner – a device everybody had been pining after in the past – had no chance to give proof of its capability because of the autumn temperatures.
As is customary in Most, a big part of the visitors came from Germany, so that there were again bi-lingual announcements and commentaries. The next round which will take place in Zolder / Belgium in about 2 weeks will be attended by at least as many German fans, eager to see if Oese will continue his pursuit race or whether Hahn and Bösiger will be able to move closer to Albacete. But particularly these two pilots can tell a thing or two about the shattering of dreams in Zolder.
Everybody is hoping for steadier weather, because in Most those teams who – in view of the black clouds and the rain lashing down from time to time – decided to fit wet-weather tyres were at a disadvantage in the end.
Many pilots think that it is already a game of pure chance to fit the right tyres considering the varying running behaviour of the different tyre batches, so that they can do without any additional problem, such as not being sure whether to choose wet-weather or dry-weather tyres.