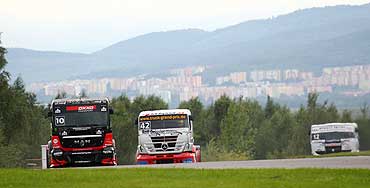 27. August 2010Most - In Most the truck racing weekend traditionally starts already on Friday. Some of the teams arrived as early as Wednesday, while the rest pitched camp in the paddock on Thursday. The weather was warm and dry, but strong gusts of wind made it difficult to erect the equipment. Some smaller hospitality units even had to be taken down today.
The rain was coming down in sheets last night, and today black clouds were looming over the track all the time, giving reason to fear more rain, but it stayed dry and now and then the sun even broke through the clouds, so that the free practice sessions were rather significant, provided that all the pilots “laid their cards on the table”.
However, in the second practice all the drivers clocked faster times, so that it can be assumed that everybody gave his best. In this case, tomorrow the odds would be in favour of the two Renault pilots of MKR Technology, Markus Oestreich (GER) and Markus Bösiger (SUI). It was in Most where the RaceTruck constructed by Mario Kress not only got its first “taste of race track asphalt” but did so many trial laps that it should be able to reach the finish line without any driver. And also the third “top dog”, Buggyra Freightliner pilot David Vrsecky (CZE), is determined to prove on his “home circuit” that he still has an ace up his sleeve, although with regard to the title in the championship he is probably almost out of the game.
In 4th – 6th position was the MAN armada, Chris Levett (GBR), Antonio Albacete (ESP) and Jochen Hahn (GER). There was a mere second splitting the top six.
So far Uwe Nittel, Vrsecky’s German team mate, managed to ease closer to the two-time European Champion after each round, but recently there was some sort of stagnation. In the second practice Nittel again gained 9th, which would be a position within the points. The other truck racing rookie, Hendrik Vieth (GER), is certainly keen to get into the points, too, in his 2nd truck racing round. But his Mercedes Benz RaceTruck has got less horse power (minus 150 hp) than the others. But yet the German, who is currently leading the Mini Challenge, nourishes hope of gaining his first points in the FIA ETRC – not an easy task considering that there is a starter field of 20 trucks, most of them newer vehicles with more powerful engines.
For the remaining weekend the weather services predict changeable weather, but the reports vary from day to day. The RaceTrucks with less powerful engines would certainly benefit from a wet surface, but on the other hand, under those conditions the outcome could be purely coincidental. Either way, most certainly we will be watching some exciting races this weekend.