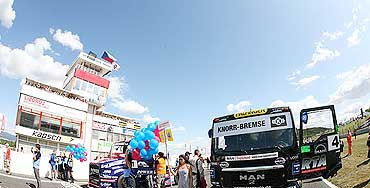 26. August 2010After their „adventure“ trip to the Smolenskring the journey to Most is rather “business as usual” for the truck racers. But, as the “old-timers” in the truck racing community recalled while waiting at the Russian/Latvian border, it was not all that long ago that they had to endure the same passport inspections and customs procedures at the Czech border. But nowadays a race weekend in Most does not differ from any event in Western Europe – except for the Euro which is not the functional currency in the Czech Republic – so that for the 6th round of the ETRC the entries are high again with 20 trucks registered. The German rally ace Uwe Nittel is again going to drive the second Buggyra Freightliner, and the rising star of the season has already collected a total of 35 points. Hendrik Vieth, a very successful pilot in the Mini Challenge series, will be driving the Mercedes Benz of the TruckWorks Team for the second time, and perhaps – with a bit of luck – collect his first points. And of course Jochen Hahn and Markus Oestreich will participate, too, so that the German colours will be strongly represented in Most. And what’s more, Most has always been the Mecca of the German fans. For many of them it is the closest circuit to home, so it’s no wonder that the presentation at the track is in Czech language as well as in German.
But of course above all it is the ‘Home’ Grand Prix of the Czechs. Buggyra – located in Roudnice, which is less than 100 kilometres away from Most – has not only chosen the Autodrom as their test track; year after year David Vrsecky and his respective team colleagues were very successful and the team always offered special PR activities. But this time another Team, Renault MKR Technology, a multinational team which is located only a few kilometres away from the Buggyra RaceTruck site, seems to be determined to set the pace. The former Buggyra Technical Manager Mario Kress has founded his own enterprise with the intention to get away a little bit from truck racing. But now he is again in the thick of it – actually even more than before. With Markus Bösiger – Kress’ long-time companion during the last few years with Buggyra – and Markus Oestreich he not only got two top pilots on board, but together with his two main sponsors, Renault Trucks – who is also name giver for this year’s Truck Grand Prix in Most – and ArvinMeritor, the Team MKR Technology surpasses everyone with their presentation in the paddock.
But although the MAN teams cannot really match up with that, in sporting terms they still call the tune with Antonio Albacete and Jochen Hahn who are currently holding 1st and 2nd position, resp., in the championship standing. And the MAN service team from Nuremberg will certainly do their utmost to ensure that the pilots retain their leads after the races in Most. But Renault pilot Bösiger, who holds 3rd position, is only 49 points behind the leading pilot, Albacete – and theoretically a single pilot can collect up to 60 points during a race weekend. And the Swiss can tell you a thing or two about how fast a race weekend can turn into a disaster
The round in Most is one of the 3-day events which starts on Friday with the free practice sessions. And there will be a non-stop programme, and that’s why the 60 to 90 minute “breaks” stated in the schedule for Saturday and Sunday should not really be taken literally. For the audience there is hardly time to pause for breath; for instance one of the highlights are the stunt flyers who will thrill the crowds, or the stuntmen on the finish straight. And all the attractions are accompanied by cheerleaders and other young ladies in different dancing groups.
In late August it’s usually quite warm in Most. But since the truck racers managed to withstand temperatures of more than 40 °C in Russia, 20 – 25 °C will certainly not shock them.
However, the weather forecasts differ widely. Perhaps it will stay dry the whole weekend while it is mostly cloudy, but it’s also possible that the scattered clouds develop into a mass of rainclouds.