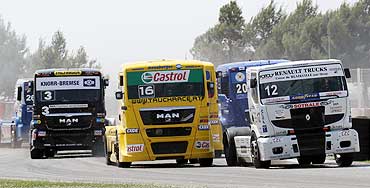 05. June 2010Albacete - Again it was bright and sunny with temperatures well above 30 °C, but today a strong wind was blowing steadily which made the heat more tolerable for the humans. However, the RaceTrucks were seriously affected by the weather conditions, and after the first timed practice session they were permanently sprayed with water – alternating between the tyres and the radiators. And almost every pilot tried to get into the top-ten with as little efforts as possible. But, of course, at the super pole the pilots could no longer afford to go easy on their trucks. Right from the start Jochen Hahn (MAN) looked set for pole position, but at the very last second local hero Antonio Albacete (MAN) went for broke and snatched away the pole from the German who just missed by 44 thousandths of a second. The MKR Renault Team – Markus Bösiger (SUI) and Markus Oestreich (GER) – lined up on the second row, and David Vrsecky (CZE) in his Freightliner and the Russian Alex Lvov (MAN) were placed on the third row.
At the time when the first race began, the temperature on the tarmac was almost 47 °C. Pole setter Albacete made a good getaway to take a lead he was never to lose. At first Hahn was directly behind the Spaniard, but he never had a real chance to overtake. Oestreich got away cleanly and emerged in 3rd position, while his team mate Bösiger lost one place to Vrsecky. Close behind the Swiss were the two Allgäuer MAN trucks with Adam Lacko (CZE) and Lvov. While the leading duo was clearly pulling away to finish with an unchallenged double victory for MAN, Oese did lap after lap in his rather ‘lonely’ third position. The chasing pack led by Vrsecky had dropped back a bit, but when Vrsecky briefly lost some strength, Bösiger and Lacko made a successful passing move. Then the Swiss demonstrated that actually he could have been a lot faster. Within a very short time he had reeled in his team mate, pushed ahead of Oestreich almost effortlessly and started to catch up with the leading duo. But suddenly Oestreich’s Renault slowed down and Bösiger, too, seemed to drop a gear. While Oese dropped back considerably and eventually finished in 10th, Bösiger settled for 3rd behind Albacete and Hahn whom he could no longer hope to catch up with, as they were by then too far ahead. Lacko finished in 4th, ahead of Vrsecky and Lvov. The Frenchman Anthony Janiec brought his Renault home in 7th, thus securing first row on the starting grid for the second race. And MAN pilot Javier Mariezcurrena (ESP), who finished in 8th place, secured pole position. In his first race in the FIA European Truck Racing Championship, Uwe Nittel (GER) – in the second Buggyra Freightliner – secured 9th position and collected his first 2 points
In the second race Mariezcurrena lost his pole advantage already on the starting straight to Janiec, who had the race of his life – even though he eventually finished ‘only’ in fourth. Hahn made the fastest start of all title contenders and emerged in 3rd position behind Lvov and ahead of Lacko, with two of Hahn’s fiercest rivals, Bösiger and Vrsecky, in tow. Albacete was behind Oestreich in 8th position and Nittel in 9th. Hahn was chasing hard after the leading duo, his MAN was definitely faster. In the 4th lap the man from Altensteig swiftly overtook Lvov, and in the 5th lap Janiec was next to be overhauled, and then the German held his leading position all the way to the finish line. But there was plenty of excitement in the pack behind him. Bösiger was stuck behind Lvov, although he was definitely faster. “No matter how hard I tried” the Swiss said later, “Lvov always made some blocking moves”. Meanwhile Albacete had closed in on Bösiger, and while the Russian once more fended off Bösiger’s passing attempt, the Spaniard took advantage of the situation by overhauling the Swiss. And after only several hundred metres the Cepsa pilot mounted an attack on Lvov which forced the Russian into the gravel bed, allowing both Albacete and Bösiger to get ahead. Janiec, too, was no match for the two chasers so that – in spite of his courageous performance – the Frenchman dropped back and finished in 4th. Lvov came home 5th, followed by Oestreich who had succeeded in passing Vrsecky two laps before the finish. The points scoring positions were completed by Lacko, MAN pilot Balazs Szobi (HUN) and Mariezcurrena. Nittel was again on good form, establishing himself again in a steady 9th position, but – with only a few more laps to go – he had to retire due to a steering problem.
In the team ranking the first race was won by Truck Sport Bernau (Albacete / Levett) ahead of Team HahnOxxo Racing (Hahn / Szobi) and MKR Technology (Bösiger / Oestreich); in the second race the winner was Team HahnOxxo Racing, followed by MKR Technology and Truck Sport Bernau. The championship ranking is still led by Bösiger with 64 points, followed by Hahn (63), Albacete (59), Vrsecky (39), Oestreich (31), Lacko (30) and Lvov (22).