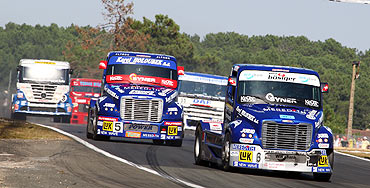 08. September 2007Le Mans - Bright sunshine, temperatures of around 25 °C (77 °F) and a soft blowing wind - with up to 36 °C (97 °F) on the track - those were the pleasant facts for today. But in Le Mans we already experienced quite different conditions in the past. As always during this season, the two Buggyra pilots, Markus Bösiger and David Vrsecky, and the MAN driver Antonio Albacete were again predominant in the free practices. In the timed practice the Spaniard was only 64 thousands faster than Bösiger and secured his pole position by a hair’s breadth. Only 4 tenths behind was Vrsecky; 4th on the grid was Jochen Hahn (Mercedes-Benz) with a slight advantage of 26 thousands to Gerd Körber (MAN). At the Qualy race Albacete made good use of his pole position at a rolling start. Some people were of the opinion that they had observed that the Spaniard, before reaching the starting line, decreased his speed considerably. Bösiger had to brake, and right at this moment Albacete and the rest of the field stepped on the gas. Hahn dashed forward and was now on second, and also Egon Allgäuer (MAN) managed to speed past Vrsecky and settled into the third position. Chris Levett (MAN) followed behind the Czech on fifth, ahead of Markus Altenstrasser (Renault). And only on seventh position was Bösiger. The second “big loser” of this start was Gerd Körber, who fell back even 6 positions. Körber managed to make up 4 positions – from 11th to 7th – and Bösiger, too, started to fight his way back up the order. At first he passed Altenstrasser, Levett and Allgäuer. But meanwhile the advantage of the leading trio, Albacete, Hahn and Vrsecky, was enormous. However, in the final lap the Czech started to attack Hahn. But the German closed the small gap at once and Vrsecky had to break hard, and made contact with a stack of tyres in the process. This was the chance for Bösiger to close on the back of Vrsecky’s truck and eventually he managed to pass the Czech who had fallen back a bit.
The Cup race at first was quite uneventful, only Allgäuer lost his 5th position to Levett. But in the 6th lap things went haywire. Obviously, there was a mechanical problem at Albacete’s truck; the engine’s power seemed to slow down. Within 3 laps the Spaniard dropped back 12 positions, and eventually had to give up. At the same time Körber overtook his team boss Allgäuer and right away started to attack Levett. In a little while he left the Brit behind, and in the same lap Vrsecky managed to pass Hahn. While everybody assumed that there would be a Buggyra double win, Vrsecky suddenly had some problems with the Freightliner’s steering system, and in the end the Czech was passed by Hahn, Körber, and Levett. Allgäuer crossed the finish line on 6th, ahead of Jean-Philippe Belloc (MAN), Altenstrasser, Stuart Oliver (MAN) and Ross Garrett (Renault).
The team ranking was won by Buggyra ahead of Team Allgäuer and Team Hahn. Bösiger could extend his championship lead and has now a total of 330 points. On second is still Albacete (278), followed by Vrsecky (242), Körber (191), and Hahn (185).