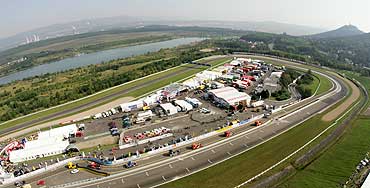 22. August 2007While half of Central Europe is moaning about the bad weather, those who will go to Most / Czech Republic to watch the 6th round of the FIA European Truck Racing Championship, can look forward to enjoying a mostly sunny weekend – at least that’s what the weather forecasts says for Friday and Saturday. For Sunday, however, the forecast is less positive, especially for the afternoon – the time when the races will take place – rainy weather is expected. But the truck racers will not be impressed by a bit of water after a seven weeks break. The Buggyra Team, heading confidently to the title with Markus Bösiger, who is leading the overall standing, will do everything in their power to make use of their home advantage they doubtless will have. But last year, right there in Most, by winning all four races Antonio Albacete had started his pursuit race against Jochen Hahn, who by then had an advantage of about 40 points and hence was already viewed as the new champion by quite a few people. And the Spaniard’s home-race is yet to come. Bearing all this in mind the Swiss will certainly not become reckless; that would be contrary to Bösiger’s nature, anyway.
A total of 22 drivers have registered, including two race-by-race pilots, David Patalacci and Andy Levett. There will be again a father-son team with Andy and Chris Levett, whereas the Rodrigues family will not participate. And this could get the FIA in another dilemma – with regard to the points. Although being “only” race-by-race pilots, they got points because they had agreed to take part in at least 7 races. But now it’s the third time Jose Rodrigues will not participate.
And it could also become difficult in the case of Frankie Vojtisek, because the circumstances that somebody would be out of action for a long time due to a serious illness, were probably not taken into consideration. For the next season there is an urgent need of reform, and this could be achieved quite easily.
All the FIA pilots get points, no matter how often they participate. When a pilot misses more than 2 races, then the larger amount the FIA pilots get for a travel money will be slashed. Race-by-race pilots rank as guest starters and cannot get any points – even if they should win a race, whereas drivers who officially cover for a FIA pilot – as in case of Frankie – get the larger travel money. This would solve the problem that arose in 2005, when 55 pilots registered in the FIA list, but only a minority of those drivers intended to enter all the races. The rest was only anxious to get the larger sum, and after only two starts they had collected a lot more money than they paid as an entrance fee.
Possibly there will be a clarification of the discrepancies in regard to the points, and then there should be again results and ranking lists of the FIA European Truck Racing Championship published on the official FIA website.