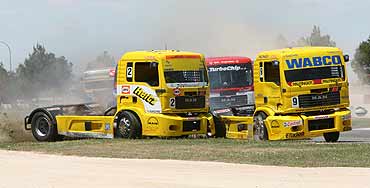 02. June 2007Albacete - All day long there was an almost cloudless sky and because of the steady breeze there was a passable temperature. Already during the first free practice the lap records were beaten on end. And this continued through the timed practice, where pole setter Antonio Albacete (MAN), with 1:54.336, beat the lap record of Ralf Druckenmüller on his VW Titan SuperRaceTruck by unbelievable one and a half seconds. With a difference of only 3 tenth to the Spaniard, Jochen Hahn (Mercedes Benz) and Markus Bösiger (Buggyra Freightliner) were next on the grid for the first qualification race. And this race was a rather stormy and tumultuous one. The temperatures had risen to 30 degrees C (86 °F), and the asphalt was even hotter with more than 42 degrees C (107 °F), but even more heated became the temper of the people; scarcely anybody could understand why the red flag wasn’t waved and the race wasn’t stopped.
At the start of the race Albacete won the battle for the lead against Hahn. Bösiger was directly behind. Gerd Körber and Egon Allgäuer on their yellow MAN trucks both passed David Vrsecky (Buggyra Freightliner) on the left and right, resp. Coming out of the first bend it seemed that Vrsecky had slightly touched Allgäuer’s truck, but it’s quite possible that the Austrian was just a bit too fast. Anyway, his MAN drifted to the outer track, and then hit a stack of tyres sending them flying around, and then sped back onto the track, where he hit the front of his team mate Körber’s truck on the left, causing the German’s truck to spin and then take to the gravel bed. There was an enormous cloud of dust, and it could only be guessed what was going on. While Allgäuer did some “pirouettes”, his opponents passed him right and left. Chris Levett (MAN) went off the track when he tried to avoid a collision and landed on the crash barrier. The track was littered with scrap and plastic parts. As is customary in Spain, the marshals at once ran across the track in total defiance of the danger, and gathered up the bigger parts. Körber, Allgäuer, and Levett were stuck in the safety zone , and now everybody thought the race would be stopped, but nothing of that sort happened. Instead, Albacete did lap after lap, followed by Hahn and Bösiger. After the first half of the race the Spaniard had problems with the gears and Hahn took the opportunity to pass the red MAN. But while doing so, the Mercedes pilot drove a bit too fast and went off the track, too. So not only Albacete could regain his leading position, but Bösiger, too, managed to pass Hahn. In this position the trio remained until they crossed the finish line. As a result of this bedlam, Vrsecky, on his badly damaged truck, fell back to the middle of the field, however, managed to recover ground and finished in 6th position. Stuart Oliver and Jose Rodrigues (both MAN) seized the opportunity and moved up to 4th and 5th position, resp. Behind Vrsecky, Javier Mariezcurrena and Jo Adua (both MAN), followed by Simeon Martin (Renault) took the remaining positions in the ranks.
Allgäuer managed to make his truck function again, and finished in 13th position; Markus Oestreich (MAN) was not at the start because of an engine failure.
The cup race, in contrast, progressed rather well, at least compared to the podium. Albacete, cheered by his Spanish fans, achieved a start-finish victory. Several times it looked as if Bösiger could get in front of Albacete, but the Spaniard, who with 1:56,587 claimed also the fastest lap of the race, could fight off any attacks and crossed the finish line with an advantage of merely 4 tenths of a second. Hahn, lying behind with a difference of only 1 second, was lying in wait for the two “fighting cocks” in the top positions to make a mistake.
Vrsecky had shaken off Rodrigues and Oliver, and followed closely behind the leading trio. A fantastic performance gave Allgäuer and Oestreich. The two MAN pilots went into the race from starting positions 13 and 24, resp. Allgäuer moved up to 6th position after only two laps and during the next seven laps fought a fierce battle against Stuart Oliver. Meanwhile Oese, too, had progressed further up, and together the two truck racing “oldies” eventually passed the British ex-champion.
And then it was make or break. But in the penultimate lap Allgäuer got off the track a bit and hit a stack of tyres. In the end he had to let pass not only Oese, but Oliver, too. That means that the Austrian finished in 7th position, ahead of Rodrigues, Adua and Mariezcurrena. Körber’s truck could be repaired in time, but because of some problems with the rear axle the man from Rheinau had to give up after only three laps. Chris Levett’s MAN will not be ready before tomorrow.
And then the victory ceremony took almost as long as the race itself. Somehow, everything went awry. But the fans’ spirits couldn’t be damped by this and eventually they struck up the Spanish National Anthem themselves. And then there was the podium for the Spanish Championship, too, Albacete ahead of Hahn and Mariezcurrena, and the podium for the team ranking – Buggyra leading, followed by Team Hahn and Team Allgäuer. But nothing seemed to go right.
And rather dubious, too, was the officially published list of the overall ranking; nobody could really fully understand things. But it seems to be quite certain that Markus Bösiger is still leading with 139 points, followed by Antonio Albacete (100), Davis Vrsecky (87), Jochen Hahn (85) and Gerd Körber (66).