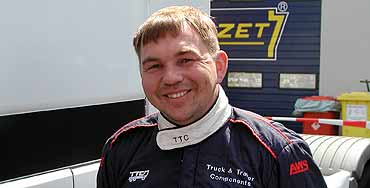 20. November 2006As we were informed last weekend, Steve Fell – at the age of 40 - passed away after a short, but severe illness. The British truck racer was an original and an institution at the European truck racing scene – truck racing was his life. Between two races on the continent he often did not return to Great Britain, but just went directly from one circuit to the next one. Truck racing became Fell’s purpose in life. He once won the British SuperRaceTruck championship, however, was not often found in the top ranking. But anybody interested in truck racing knows that even at the back of the field the pilots fight as hard as the others. And so at the race tracks Fell was very often occupied with repairing and mending his truck far into the night, because he also doubled as a mechanic. But whenever he needed some help in the paddock, he could always reckon on the other teams. Last season, the pilot and his Redline team focused mainly on the British Championship. His team is going to dissolve now.